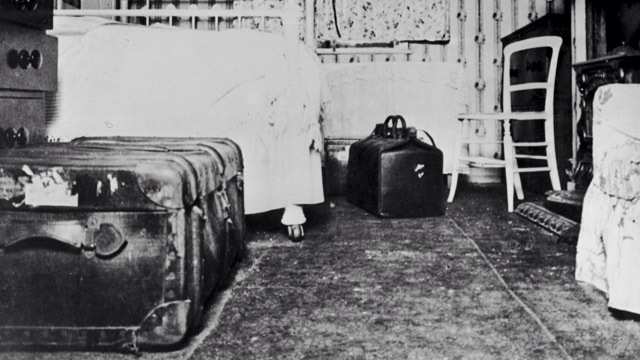 In the 1930s Brighton became notorious for a series of “trunk murders”, when dismembered female bodies were found crammed into separate trunks at Charing Cross Station in 1927 and two more bodies at King’s Cross and Brighton stations in 1934.

The seaside resort, best known as a destination for its illicit weekend trysts, was given the unwanted nickname of ‘Queen of Slaughtering Places’ and suddenly Brighton found itself to be the crime capital of England.

On 10 May 1927 staff at Charing Cross railway station in London noticed an unpleasant smell in the left luggage department where they found the dismembered body of a woman.

“Concerned by a foul smell in the cloakroom he discovered it was coming from a locked trunk.”

Sir Bernard Spilsbury, an eminent police pathologist who had worked on the Dr Crippen case in 1910, was called in to carry out a post-mortem examination at Westminster Mortuary. He found a limbless body with its legs hacked off at the hips and the arms removed from the shoulders. Each piece had been wrapped in brown paper and tied up with string. The woman’s shoes and handbag were also in the trunk and the crime had been committed two-to-three weeks previously.

Seven years later on 17 June 1934, Southern Railway cloakroom attendant William Joseph Vinnicombe found the remains of a woman in a trunk at Brighton Railway Station. Concerned by a foul smell in the cloakroom, he discovered it was coming from a locked trunk. Summoning Detective Bishop of the Railway Police who opened the trunk, they found several layers of paper and cotton wool soaked in blood and a parcel tied with a sash cord that held together arms and a torso. The next day a case containing the woman’s legs was found at King’s Cross Railway Station.

Carrying out the post-mortem on 19 June 1934, Sir Bernard Spilsbury stated that the 25-year-old woman was pregnant and suffered a heavy blow to the head with a blunt instrument. The only clue was a piece of paper with the word “Ford” written on it.

The country was horrified and Brighton police called in Scotland Yard to conduct a massive nationwide operation. The cases of 700 missing women were reviewed and police checked hospitals and known abortionists. For the first time ever the police appealed directly to the public for help and information using the Press.

After a month of investigations with few results police concentrated on house-to-house searches and on 15 July they found a locked room containing a trunk at 52 Kemp Street, Brighton. Inside the trunk was another body of a decomposing woman.

42-year-old Violet Kaye had moved from London to Brighton with her lover Tony Mancini in September 1933. Her real name was Violet Saunders and she was a known prostitute who had once been a dancer touring the country in revue shows.

A heavy drinker who was insecure of her much younger lover, she accused Mancini of making a pass at one of the waitresses at the Skylark Café where he worked. A few days after their argument, Mancini told his work colleague that Violet had left him and gone to Paris.

Tony Mancini was picked up for vagrancy on the outskirts of London on 17 July. When questioned he gave his name as Cecil Lois England and claimed he had found Kaye dead in their flat and assumed she had been killed by one of her clients. He had panicked because he had a criminal record and had hidden her body in a trunk. On hearing of the house-to-house searches he went on the run.