The Disappearance of cave diver Ben McDaniel is a real mystery that despite extensive investigation remains unsolved.

In the late 2000’s, Ben McDaniel was going through a rough spot in his life: he was newly divorced and his construction business went under, leaving him $50,000 in debt to the IRS and state. His younger brother recently died as well, at the age of 22, and Ben was the one who discovered his body.

Ben’s parents had suggested he take a “sabbatical” and had offered to help him financially, as well as put him up in their rental home in Santa Rosa Beach in Florida. He accepted and moved in April 2010. The move was good for Ben, as his confidence grew back and he was optimistic about the future and recovering from his mistakes.

He also began scuba diving, a hobby he had since he was 15. He preferred to dive in fresh water, as opposed to sea water, so he began to frequent Vortex Spring – a commercially operated dive park in Ponce de Leon, FL. One of the features of Vortex was their caves. The caves, however, are extremely dangerous to swim in, and only those who could prove qualified were allowed to swim there – the caves had a sign warning divers with a Grim Reaper, as well as a locked gate, the key of which was only given to those with a cave diving certificate, which required two months training and 125 dives with a trainer.

From the gate, over 1,600 feet of the caves had been mapped out, but the full length of the caves is unknown. The passages can narrow down to 10 inches, requiring high skill and finesse to get through.

The map below is accurate – showing the narrow passages 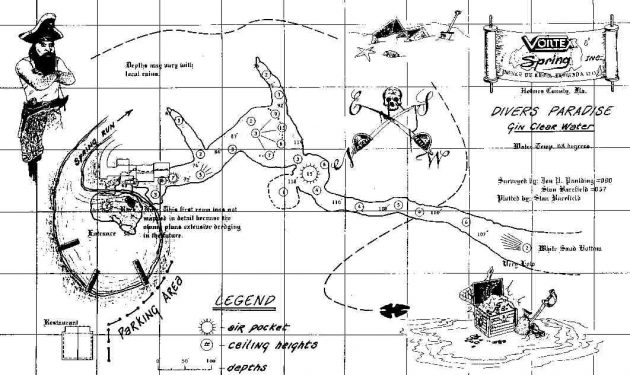 Ben became a regular at Vortex and was known by most of the employees and fellow divers. An employee, Chuck Cronin, had believed that Ben was overconfident in his diving ability. This opinion was reiterated by divers who knew Ben in an online forum.

Four months into his move to FL, Ben returned to Tennessee for a week. His parents and girlfriend reported that he was in good spirits and was optimistic. He was wanting to become a scuba diving instructor and open his own diving business, and was interested in cave diving as well. He left to go back to FL on August 14, and left a happy note for his parents in which he thanked then for helping him in this difficult time, as well as promising to return the favor in the future.

He reached FL on the 18th, and went to Vortex. He was seen there, looking at the cave entrance and gate, and others were suspicious of what he was planning. He did one dive midday, and after resurfacing, he filled his tanks (though it is not known what he filled those tanks up with).

The transaction was captured on security cameras. He stayed at Vortex the rest of the afternoon, writing notes in his log. He called his mother later in the evening, and went in for another dive at 7:30 PM. Cronin and fellow employee Eduardo Taran saw Ben descending with a helmet and lights on, which made them think he was going into the caves.

Then Taran opened the gate for Ben and returned to Cronin. He was not seen again. The two employees were supposed to stay and wait for Ben to resurface, but they did not do this that night. Ben’s truck was in the parking lot for two more days before it was noticed, and Taran called the police.

The spring was taped off as a crime scene. None of Ben’s equipment was accounted for, and his wallet was found in his truck, with $700 in cash. Because of these facts, police and the dive shop employees assumed he had never resurfaced and believed he had drowned while making his way out of the caves.
Ben’s parents and girlfriend were notified, and came to FL to help. Cave divers also volunteered to dive and search for him. In the divers’ searches, they looked in cracks and fissures – spots where Ben might have gotten stuck in a panicked attempt to escape before his tanks were empty.

They found no sign of Ben, but found his tanks near the entrance of the cave. This struck the divers as inconsistent, since cave divers place extra tanks long their route for decompression uses, so they shouldn’t have been at the entrance. Also, his tanks only contained air, and not the special mix needed for cave diving.

There was still no sign by August 22. Edd Sorenson, a veteran cave diver and recovery specialist, was called to help. He came to Vortex and wanted to dive in the caves, but was warned against it by other cave divers and rescue organizers; they claimed it was too dangerous to go any farther than they already had. Sorensen persisted and made three separate dives, going 1,700 feet into the cave – further than Ben had mapped. He found no body and no evidence of anyone in the caves based on marks that would have been made on the cave walls. Sorenson said based on Ben’s ability that there was no way he would have made it though the passages.

He said “I know what I’m doing and I barely made it though…He’s not in there.” Ben’s parents hired a private investigator, who also had originally mapped the caves in 2003. After seven separate dives, he found nothing. He said “If he’s in there, I don’t know where he’d be.” 16 divers spent almost 40 hours searching for Ben with no results.

Divers began to question whether Ben was in the cave. They started to believe that his body had been physically removed from the spring, either by a person or though the wash out.

Cronin and Kelly were quoted as to believing that he staged his disappearance to escape the trouble of his life and start anew. Authorities took these two possible explanations into consideration in their search.

Cadaver dogs searched the spring and surrounding woods with no results. Nothing was found searching the wash out outlet. 30 separate tests of the waters for decomposing body matter came back negative. Taran was also given a lie detector test and passed, though his test was only three questions and no one else working was given a test.

Ben’s parents grew frustrated with the search and believed his body was in an unexplored part of the cave. The offered a $10,000 reward to anyone “brave” enough to venture into the cave and find him. Divers who had already attempted to find Ben felt insulted, since they had risked their own lives trying to find him in the treacherous cave. They were also worried that unexperienced divers would try to find Ben and get themselves killed in the process. Audaciously, Ben’s parents upped the reward twice, amounting to $30,000. A man from Mississippi named Lenny Higgenbottom died in the caves.

There is no evidence to show that he was specifically looking for Ben, but it was believed among the divers that that was the case. Ben’s parents rescinded the reward amid controversy over the death, and to prevent future deaths of reward seekers. However, at this time, Ben’s parents had also started to believe that Ben was not in the cave and that he was murdered.

The death of Lowell Kelly:

Kelly pleaded no contest to his criminal charges, and had to serve seven years probation. However, he would not live long enough to complete this. In December, during a cook out at Vortex, Kelly allegedly fell down stairs and sustained a head injury. Someone at the party took him to his home and left him to rest. He was found by a different person in the morning in critical condition. He was comatose by the time he got to the hospital, and died a month later.
The sheriff had implied that they were not given the full story about what happened to Kelly that night. However, they will not name the persons who dropped Kelly off, who found Kelly the next day, and they will not release their autopsy findings pending an investigation into his death. Ben’s father had said in an online forum that he believes Kelly was murdered over what he knew about Ben’s disappearance. He said “…he talked to much when he drank…”

Ben’s parents truly believed that he was murdered and the disappearance was used to cover that up. They discovered that many of the employees at Vortex had criminal records. Ben’s father became critical of how the police and sheriff handled the case, and that Taran was given a substandard lie detector test (Taran was asked only three questions, as opposed to the standard of one hour straight of questioning), and that none of the other employees were tested.

Ben’s father has said online that he knows a lot more information about his son’s disappearance, but can’t say anything about it yet because of the investigation. He said that there is “coming a point in time when I will reveal the answers too…the questions associated with my son’s disappearance.”

A death certificate was issued for Ben in 2013.