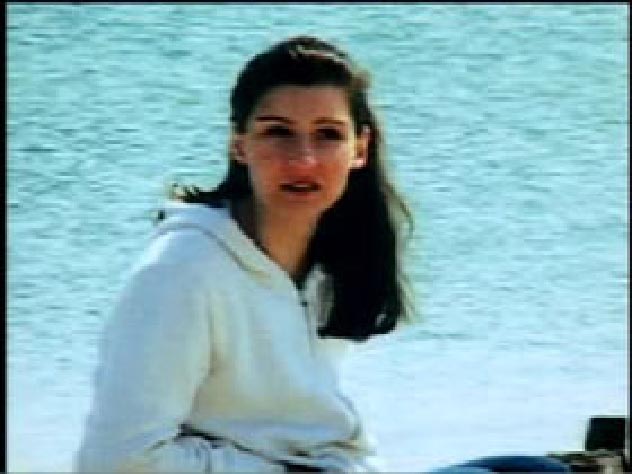 In May 2000, Claudia Kirschhoch was an assistant editor for Frommer’s Travel Guides in New York.

Following a delayed flight from Jamaica back to New York, Claudia stayed at the Beaches Resort in Negril. The last known sighting of her was walking on the beach. She was never seen again. All her possessions remained in her hotel room.

It was reported she’d become close to bartender Anthony Grant during her stay.

He called in sick the day after she disappeared.

He was investigated and despite a strand of her hair found in his car and her scent detected in the boot of his car, he was never considered a serious subject.

Claudia’s disappearance still remains a mystery, this is the full story

29-year old New Yorker, Claudia Kirschhoch, was offered a paid work trip to the new Sandals resort in Cuba in 2000. The travel writer met up with other travel writers and arrived in Montego Bay on 24 May 2000. Unfortunately, visa problems led to them being stranded in Jamaica and unable to fly back to New York since flights were fully booked for the next week.

Claudia and a fellow writer, Tania Grossinger, then went to the Sandals resort in Negril instead. They stayed at the resort for three days before managing to book a flight out of Jamaica. However, Claudia wasn’t ready to leave. She and Tania had breakfast together before Tania’s flight. That afternoon, Claudia took a stroll on the beach and disappeared.

Claudia’s parents called the company she worked for after a couple of days of struggling to get in touch with their daughter. They received the shocking news that Claudia never returned to work. When Claudia’s hotel room was searched her passport, phone and flight ticket to New York were all there. Management at the hotel seemingly didn’t care that the room might contain clues to Claudia’s disappearance and they simply rented it out to other visitors. It wasn’t long before Claudia’s phone disappeared as well as the logbook that recorded all license plate numbers of cars entering and exiting the resort.

It was discovered that Claudia spent time with a bartender named Anthony Grant who called in sick the day after Claudia vanished. He stayed away from work for four days and when police finally got hold of him, he admitted that he and Claudia saw each other on 26 May. He denied any involvement in her disappearance even though sniffer dogs traced Claudia’s scent to the trunk and back seat of his car. He was never named as a suspect or arrested on any charges.

Claudia’s parents searched non-stop for their daughter, but she was officially declared dead in 2002. Her fate remains unknown.

The last time anyone remembers seeing Claudia Kirschhoch was five years ago, early in the afternoon, as she was walking on a beach in Negril, Jamaica, wearing her new blue bikini.

The 29-year-old New York travel writer, stuck at a Beaches resort in Jamaica after a reporting trip to the company’s new Cuban location was canceled en route, left her wallet, passport and return ticket in her hotel room. And then, she vanished.

Kirschhoch’s parents, Fred and Mary Ann Kirschhoch of Morristown, N.J., have filed a lawsuit against the hotel in Miami courts, but still don’t know what happened to their daughter; her body hasn’t been found and no one has been charged in her May 27, 2000, disappearance.

Then years later, Kirschhoch’s family follows each new development in another high-profile disappearance in the Caribbean: that of Natalee Holloway, the Alabama teenager who went missing on the final day of a graduation trip to Aruba this spring.

The parallels to their own experience are painfully familiar, but riveting, Kirschhoch’s parents said. They’ve been watching the extensive cable television coverage of Holloway’s case for anything in Aruba that might trigger a clue to their own daughter’s disappearance — anything that might help fill the five-year void in their own lives.

‘I heard Natalee’s mother say, `We want our daughter returned,’ ” said Kirschhoch’s mother, Mary Ann Kirschhoch, 65. “I knew exactly what she was thinking. Let us have our children back, so that we know where they are.”

In their quest to learn what happened to their daughter, Kirschhoch’s parents sued the Sandals Resort chain, the company that owns the all-inclusive Beaches. The case, filed three years ago in Miami-Dade Circuit Court against the company’s U.S. operations, is expected to go to trial this fall.

Filing it required the family to have Kirschhoch declared legally dead by a New Jersey judge in 2002, a difficult step that forced her parents to put in writing what they already knew in their hearts.

”We had to tell him about family background and how close we were as a family,” said Fred Kirschhoch, 62. “To go through it was heartbreaking. But we also knew we had to do it to pressure Sandals. The only thing that might hurt them was money.”

Kirschhoch’s parents remain convinced that employees at Beaches Negril know what happened to their daughter.

Her parents said they believe the lawsuit is the only way to force hotel employees into a courtroom to answer questions about their daughter’s disappearance from a resort owned by one of the wealthiest and most influential people in Jamaica, Gordon ”Butch” Stewart.

Kirschhoch, an editor for Frommer’s guidebooks, was supposed to go to Cuba to visit a Sandals-owned resort in 2000, but the trip was canceled because the company was concerned about anti-American sentiment during the Elián González saga. So instead, the company offered a trip to Beaches in Negril, where Kirschhoch and other travel writers waited for a flight home.

While she was in Negril, Kirschhoch made friends with a bartender at the resort, Anthony Grant, who took her to a reggae concert the night before she disappeared. Grant was later interviewed by the FBI, but was never considered a suspect by Jamaican authorities.

The morning after her evening out with Grant, Kirschhoch had breakfast with another travel writer, who had snagged a flight home later that day.

As far as investigators know, after the breakfast with her colleague, the last credible sighting of Kirschhoch was by a lifeguard who may have seen her walking on the beach near the resort around 1 p.m. on May 27, 2000. By June 2, when she hadn’t contacted her family after her scheduled date of return and didn’t show up for work, Kirschhoch’s parents called the hotel in Jamaica. Kirschhoch hadn’t slept in her room since May 27, the housekeeping staff reported.

Kirschhoch’s parents charge in their lawsuit that important clues were lost in the course of the investigation. Her cellphone disappeared, and the resort developed the film in Kirschhoch’s camera, but then told the family that there were no photos on it.

According to the suit, log books showing who entered and exited the resort disappeared for the period that Kirschhoch was there, and security surveillance videos were recorded over.

The family’s lawsuit against the hotel chain claims that the hotel should have had better security practices, and that its staff was negligent for failing to alert anyone that Kirschhoch was missing for several days — a holdup that hampered the investigation into her disappearance.

A judge has ruled that when the suit goes to trial, the family is eligible for punitive damages for some of the hotel’s failures. That means that if a jury sides with the family, the hotel could take a financial hit for inflicting emotional distress on Kirschhoch’s parents and for willfully destroying evidence.

Sandals will not comment on the pending lawsuit, said resort spokesman Michael Hicks.

Although the family was initially on good terms with the hotel after Kirschhoch’s disappearance, that changed after a press conference in Jamaica five years ago when a public relations executive for the hotel tried to paint their daughter as a hedonistic foreigner only in Jamaica for a good time.

Nothing was further from the truth, Kirschhoch’s parents said. Their daughter was there to work, and was an invited business guest of the chain.

”That was a telling moment, a moment that we had a revelation that we were in for a problem here,” Fred Kirschhoch said.

The Kirschhoches have written to the Holloway family to offer support.

”It’s there again in the TV and in stories,” Mary Ann Kirschhoch said. “You know how difficult it is for that family.”

‘Like my little son said the other day, `Mom, when they find Natalee, she’s going to be in big trouble,’ ” because in his mind he thinks she’s just running away and hiding somewhere,” Parten said.

Critics of the television coverage of Holloway’s case argue that thousands of people disappear in the United States every year, and it’s unfair to single Holloway out for so much attention.

But it remains relatively uncommon for a woman traveling to simply disappear, especially on a chaperoned trip like Holloway’s, or Kirschhoch’s supervised media junket.

Most of those are simply people who forgot to check in with their family and friends at home, Aggeler said. College students backpacking in Europe are among the worst offenders, but the State Department follows up on every inquiry.

”There are some cases we follow for years,” Aggeler said.

The intense media coverage of Holloway’s disappearance has reignited interest in Kirschhoch’s dormant case. Fred and Mary Ann Kirschhoch have appeared on several national television programs recently, including the O’Reilly Factor on Fox.

Their daughter’s disappearance was also discussed on a radio station based in Port St. Lucie, which prompted a call from a man who said he knew something about Kirschhoch, a lead that soon fizzled.

The last major movement in Kirschhoch’s case was in 2000, when the FBI sent agents to Jamaica from a Miami-based squad to help Jamaican police investigate Kirschhoch’s disappearance. Now, it’s just one of those cases that everyone remembers, but it remains unsolvable, said Judy Orihuela, the FBI spokeswoman in Miami.

”It was such a big deal back then,” Orihuela said. “I haven’t forgotten it, it still sticks.”

The FBI closed its investigation, and no one was charged in Jamaica with a crime. For the most part, Kirschhoch’s family found the Jamaican authorities uncooperative and unwilling to follow some of their suggestions. They never were allowed to take a close look at the police file, the family’s private investigator, David Betts, said.

”As I’ve said many, many times, nobody’s saying that Claudia was murdered,” Betts said. “She died. How that happened is a matter of speculation. Without cooperation from the Jamaican authorities, it’s very, very hard to get to the truth.”

Kirschhoch’s parents said they hope their lawsuit will help them arrive at the truth of how their daughter died. At a minimum, it might shed some light on the security practices of all-inclusive Caribbean resorts, the Kirschhoches said.

”She was so inquisitive,” Mary Ann Kirschhoch said of her daughter. ‘She wants answers for us. People say, `Isn’t it time to just accept it?’ But we can’t. Some people may be that way, but that’s not Fred or me.”