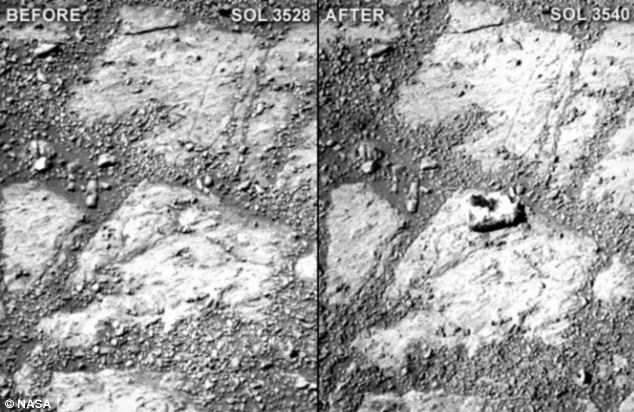 Mystery on Mars: Scientists baffled after rock suddenly appears out of nowhere in front of Opportunity rover

Nasa’s Opportunity rover has spotted a rock that seems to have appeared out of nowhere, leaving mission engineers scratching their heads.

The obstacle, which is about the size of a doughnut but has been given the rather grand title of “Pinnacle Island”, popped up in front of the rover in early January 2014. A photo taken on sol 3528 of the mission shows bare bedrock, but on sol 3540, the rock had suddenly appeared. 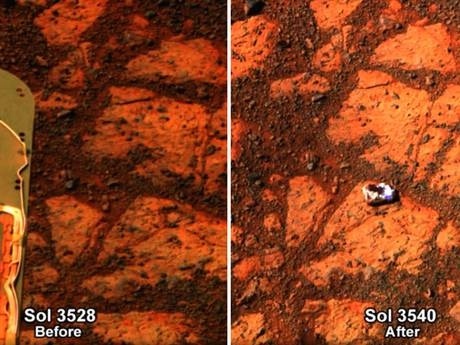 Experts said they were “completely confused” by both the origins and makeup of the object, which is currently being investigated by Opportunity’s various measuring instruments.

Astronomers noticed the new rock had “appeared” without any explanation on an outcrop which had been empty just days earlier. The rover has been stuck photographing the same region of Mars for more than a month due to bad weather, with scientists at the Jet Propulsion Laboratory (JPL) in California monitoring the images it sends.

He said the images, from 12 Martian days apart, were from no more than a couple of weeks ago. “We saw this rock just sitting here. It looks white around the edge in the middle and there’s a low spot in the centre that’s dark red – it looks like a jelly doughnut.

“And it appeared, just plain appeared at that spot – and we haven’t ever driven over that spot.”

Did aliens drop it as a joke to confuse us?