The mystery of the missing actress, that was found 10 years later – as a skeleton!

The Strange Riddle of the Fingringhoe Skeleton,

Ada Constance Kent(AKA Connie Kent) was a British actress, who appeared in both stage and film productions. It has been claimed she also went by her stage name: Vera Verchayle, but this is not supported by the British film archive records.  After a long period of working in London, Ada moved to the English countryside. Unmarried, she lived alone at her cottage in the small and beautiful English village of Fingringhoe, Essex. Ada was a recluse and seldom mixed with others.

Ada was last seen alive on 6 March 1939 when she went into the Whalebone pub to buy her usual packet of Woodbine cigarettes.

In 1939 Ada was reported missing by a worried friend, who said she had not seen her for 3 months. She told police that she had visited and searched the house looking for Ada, but did not find her.

The Kent police asked Bernard Constable, a local policeman to check the house, which he did with another person. His statement is clear that nobody, or no body, was in the house at the time of the search.

Press reports state that she seemed to have just “vanished” from her cottage one summers afternoon. These reports contained the following information:

The door to the cottage was found unlocked, A supper tray, with the remains of a meal, was resting atop the dining table, a copy of Romeo & Juliet was found open in a chair near the fireplace, her coat was still on the hook

The Police searched the cottage from top to bottom and found no other clues as to the whereabouts of Ada.

In 1942, a close friend of Ada, George Wynkoll, visited the cottage to track down his missing friend. He claims to have broken in through the locked front door, searched the small three room house from top to bottom. He checked under furniture and in the cupboards, he noticed the open book and supper tray.

Like the two previous searches, he found nothing out of place – and he too stated “it appears Ada just vanished and never returned”. 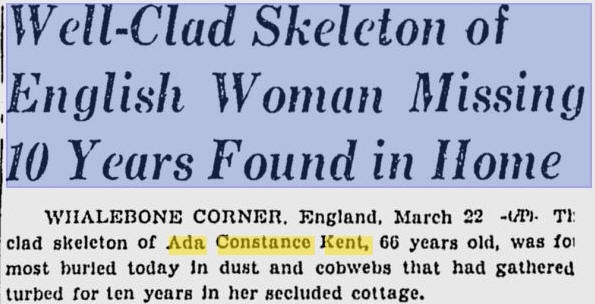 The money in the bank

In March 1949 a Bank contacted the local police regarding Ada Kent’s account. The bank stated they had tried, but failed, to contact her on a number of occasions regarding a number of “large” deposits made into her account. The last deposit had been made in September 1948.

Police again went to check the cottage, and this time they made a shocking discovery!

In the bedroom, laying next to a single bed, was a fully clothed skeleton.

Next to the skeleton was an empty bottle marked “POISON”

The police report states that the cottage, apart from being dirty, looked like it had not been touched in a decade. They noted the supper tray, but not the book!

The report ruled out robbery, as they discovered jewels and money in the cottage.

Within hours of the the discovery Fleet Street reporters had descended upon the scene, and the story was making headline news around the world. 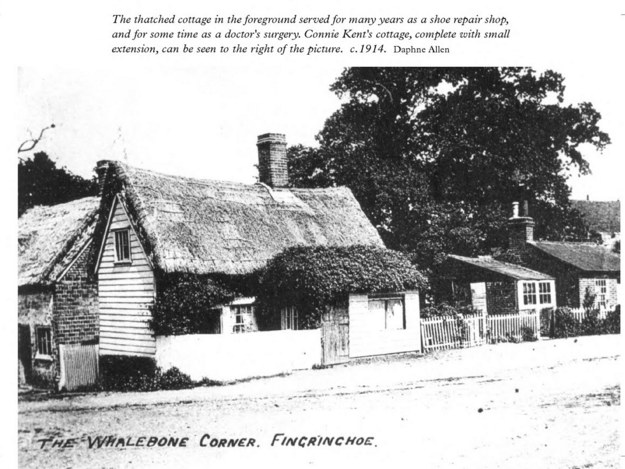 THE mystery surrounding tumbledown Church Cottage at Whalebone Corner, Fingringhoe, was only half-solved at yesterday’s inquest in the crowded courthouse at Witham. Mr. Joseph Glover, foreman of the jury, told the Deputy-Coroner for North-East Essex (Mr. F. E. M. Puxon) that while he and his colleagues agreed that the yellowed bones lying on the Clerk’s table in the court were those of former actress Ada Constance Kent, aged 69, they could not say where or when death took place. “The cause of death is unknown,” he added.

Before ever the police took an interest in Miss Kent’s disappearance from the cottage in 1939, children running in and out of the place during the war years had discovered the bones. Now aged 21, Derek Edward Allen told the jury how, when he was about twelve, he and friends had clambered in through the cottage window. They had seen the bones under the bed, but they did not once think they were human. “We thought they were those of an animal a dog had gnawed,” he said.

NOTE: The Scotland Yard forensic report states the skeleton is unlikely that of Ada Constance Kent, as it is too large, and likely even that of a Man.

Expert medical evidence was given by Dr. Francis E. Camps, county pathologist, who demonstrated the similarity between what he and his colleagues had discovered from the remains and the description given of the lonely Miss Kent. He said there was no evidence of injury to the major bones; neither was there any sign of strangulation or poisoning. Landlord of the Whalebone public-house, Alfred J. Hasler, said he last saw Miss Kent on March 6th, 1939. She looked very ill and was coughing badly. She never mixed with other people,” he told the Coroner.

The night before she was first missed. Reuben G. Winkle, jobbing gardener, of nearby Church Green, saw a light in the bedroom window of Church Cottage. Six months later he and P.c. Constable (now a Rowhedge foundry-hand) had looked inside the cottage. They went just inside the door of the bedroom, but did not see a body or any bones. He did not notice any odour in the room.

The case remains a real unsolved mystery, and no logical explanation answers all the strange facts. 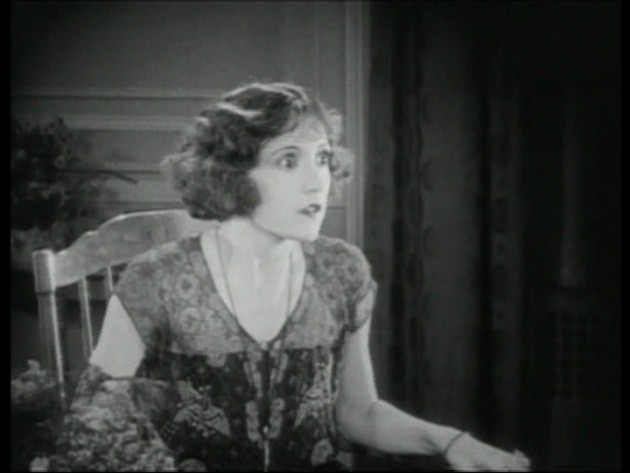