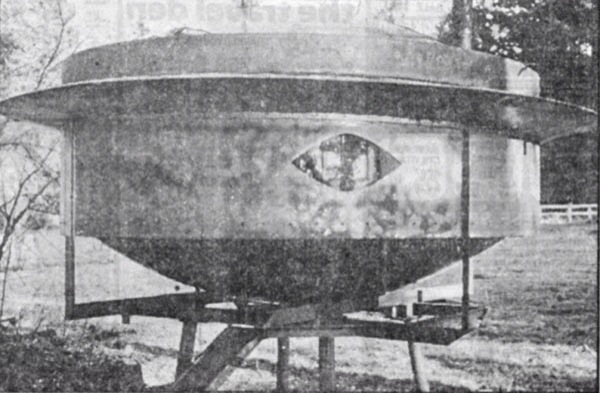 A young man, Granger Taylor was a mechanical genius that was self-taught. He dropped out of school in the eighth grade, however, at the age of only fourteen he built a one-cylinder automobile which is now on display the Duncan Forest Museum along with a steam locomotive that he hauled out of the woods and restored. At age seventeen he overhauled a bulldozer that no one else could repair. He built a replica of a World War II fighter plane that was snatched-up by a collector for $20,000.

Granger always wondered how Flying Saucer were powered. He built his own out of two satellite dishes, one top and one bottom, as an inspiration. His “flying saucer” became a home-away-from-home with couch, TV and a woodstove. He would often sleep in his “space craft”.

He later said he was in contact with extraterrestrials that were going to show him how their technology works. He told everyone he was going for a trip on an alien space ship. Then one night in November of 1980 he disappeared and left a note for his family. To this day, despite an RCMP investigation, he has never been found, nor have they found any possible clues as to his whereabouts.

The Granger Affair is certainly a great Canadian mystery. Surely a man of his obvious mechanical talents would not go unnoticed had he simply slipped away in the night. After a four year investigation authorities haven’t a single lead to where he might be.

The Granger Taylor Flying Saucer rests on stilts in the backyard of the Taylor home at Duncan on Vancouver Island. It is a mute memorial to its builder, young Granger Taylor.

“He built his spaceship out of two satellite receiving dishes and outfitted it with a television, a couch, and a wood-burning stove. He became obsessed with finding out how flying saucers were powered, spending hours sitting in the ship thinking and often sleeping there,” wrote Douglas Curran in his book: In Advance of the Landing: Folk Concepts of Outer Space (1985).

Then one November night in 1980 Granger Taylor simply disappeared.

He left behind a yard strewn with old tractors; machine engines, vintage automobiles, a bulldozer, as well as a note which read:

Dear Mother and Father, I have gone away to walk aboard an alien ship, as recurring dreams assured a 42 month interstellar voyage to explore the vast universe, then return. I am leaving behind all my possessions to you as I will no longer require the use of any. Please use the instructions in my will as a guide to help. Love, Granger.

The forty-two months were up in May 1984 and his parents, Jim and Grace Taylor, leave the back door unlocked in case their son shows up. But he never has.

Granger Taylor left school in the eighth grade and found work as a mechanic’s helper, showing a flair for repairing machinery. At the age of fourteen he built a one-cylinder car which is on display at the Duncan Forest Museum. He constructed a replica of a World War II fighter plane, and he left behind his silver-and-red flying saucer.

He told a friend a month before he disappeared that he was in mental contact with someone from another galaxy and that he was in receipt of an invitation to go on a trip through the Solar System.

“On the night that Granger disappeared, ” wrote Curran, ” a storm struck the central part of Vancouver Island. Hurricane winds were reported and electrical power was knocked out. Granger vanished, along with his blue pick-up truck.

“After four years of ‘exhaustive checks’ of hospital, passport, employment, and vehicle records, the Royal Canadian Mounted Police have not uncovered a single clue as to the whereabouts of Granger Taylor. ‘I can hardly believe Granger’s off in a spaceship, ‘his father said. ‘But if there is a flying object out there, he’s the one to find it.’ “