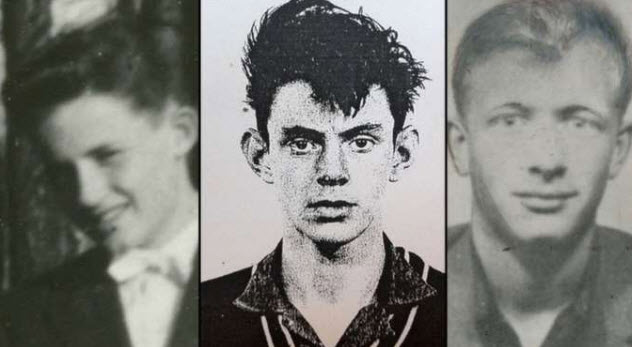 Three strange things coincided on July 29, 1965, in the city of Gothenburg in Sweden. All in all four young men and one Volvo car disappeared that day. It is Sweden’s only unsolved mass disappearance, and the rabbit hole is very deep, confusing and full of conflicting information. This is just an attempt to provide the basic information of the three separate cases.

In what is regarded as the only mass disappearance in Swedish history, the events of July 29, 1965, in Gothenburg saw four young men seemingly vanish into thin air.

Gay Karlsson, Jan Olof Dahlsjo, and Kjell Ake Johansson were friends who worked together at the shipyards. On that rainy July morning came the last known sighting of the three men as they drove a blue Volvo out of town.

Reports that the men were missing came at different times from family members. Perhaps because of this, police were a little slow to connect the disappearances of the three men.

None of them had a driver’s license, which meant that at least one of them was driving illegally. Although the young men had occasionally found themselves in trouble for petty crimes (and always seemed to have plenty of money, coincidentally or not), they were generally regarded as “good guys.”

Whether or not there is a connection, a fourth person went missing that day in Gothenburg. Hubner Lundqvist was traveling to Lysekil and went through Gothenburg. There, he sent his family a postcard that read, “All is well, don’t worry!”

That is the last-known location of Lundqvist, although it is theorized that he likely hitched a ride with the three men in the blue Volvo. Whether the three men were already known to him or the meeting was pure chance is not known. The case remains unsolved.

The port city of Gothenburg has always been Sweden’s gateway to the world. This was especially true in the decades following World War II, when the rebuilding of Europe created a huge demand for Swedish wood, steel and industry products.

Gay Karlsson, 22, Jan Olof Dahlsjö, 21, and Kjell Åke Johansson, 16, (pictured here, from left to right) were three friends who found work in this environment, at shipyards and industries. They were loyal and trustworthy to their friends and families, but were also known to get into trouble with the police for minor crimes. Sometimes they carried surprisingly large amounts of money.

They were last seen on the rainy thursday morning of July 29, 1965, driving a midnight blue Volvo PV444 that belonged to Jan Olof Dahlsjö’s brother, even though none of them had a driver’s license.

All three of them were reported missing at different times, and it took months until the police could confirm that they disappeared at the same time. They had salaries waiting for them that were never collected. All of them had girlfriends, and Kjell Åke, the youngest, even became a father shortly before the disappearance.

They had been heard planning to go on a camping trip together to the village of Åsa south of Gothenburg. But the weather was especially bad that day and not suitable for camping, and they didn’t tell anyone that they were leaving on that day.

Extensive searches of bodies of water in and around Gothenburg have turned up nothing that indicates that they crashed into the water somewhere.

The fourth person that went missing from Gothenburg that day was Hübner ”Hymme” Lundqvist, 18, an art student from Stockholm. He spent the summer of 1965 with his family at their summer residence in Torekov in the south of Sweden, but got bored and said that he wanted to travel to Lysekil, north of Gothenburg, where a collective of artists resided. The path to Lysekil goes through Gothenburg, and he either hitch hiked his way there or took a train.

He left his family on the morning of July 29, and arrived in Gothenburg sometime during the day, where he sent a post card to his parents that read “All is well, don’t worry”. This is the last trace of him.

Two men, one of them dressed as a woman, stormed the bank at Gamlestadstorget in Gothenburg shortly after 2 pm on the same day, firing wildly into the ceiling with submachine guns.

A bank customer, that happened to be a wrestler, tackled one of the robbers to the ground. This caused the robber to shoot himself in the leg, but the robbers managed to leave the bank with a loot of 18000 kronor. Bank employees chased the men to see where they went.

The robbers scrambled down to the nearby river, and stripped away their clothes, revealing scuba gear underneath. The bank employees tried to hinder the men by throwing rocks at them, but the robbers fired back with volleys of gun fire, forcing the pursuers to retreat.

The robber who accidentally shot himself stayed stationary under the murky water for several hours, hindered by his wounded leg, while the other one slipped away with the money. Both of them and a third accomplice got caught by police eventually. All three of them were hungarian citizens who fled to Sweden after the unrest in Hungary during the 1950’s.

The parents of “Hymme”, the missing art student, always believed that he left the country to work on the high seas. Two Swedish sailors have reported speaking with a young Swedish man of similar appearance in the late 1960’s, once in Singapore and once in Australia. But these sightings are unconfirmed.

A weird observation was made by the sister of Gay Karlsson, one of the missing dock workers, some time after his disappearance. She went to look for her brother at his apartment, but a stranger opened when she knocked at the door.

The young man in front of her was dressed in a knitted sweater that she had made for her brother. The stranger was visibly stressed, and told her to look for her brother in the pub district.

Police, reporters and amateur detectives have tried to connect the dots between the cases for more than 50 years, but all attempts have failed.