The strange mystery of the missing people

Sometimes people vanish! The mystery of the MV Joyita is one of those times.

MV Joyita was a merchant vessel from which 25 passengers and crew mysteriously disappeared in the South Pacific in 1955.

To this day, no evidence of the whereabouts of the missing people has surfaced.

The boat was found adrift in the South Pacific without its crew on board. The ship was also in very poor condition, including corroded pipes and a radio which, while functional, only had a range of about 2 miles due to faulty wiring.

Despite this, the extreme buoyancy of the ship made sinking nearly impossible. It was impossible for the ship to sink. Investigators however were puzzled as to why the crew did not remain on board and wait for help.

The boat had been scheduled to leave on the noon tide the previous day but her departure was delayed because her port engine clutch failed. The Joyita eventually left Samoa on one engine. She was carrying 16 crew members and nine passengers, including a government official, a doctor, a copra buyer, and two children.

On October 6 a message from Fakaofo port reported that the ship was overdue. No ship or land-based operator reported receiving a distress signal from the crew.

A search and rescue mission was launched and, from 6 to 12 October, Sunderlands of the Royal New Zealand Air Force covered a probability area of nearly 100,000 square miles (260,000 km²) of ocean during the search.

But no sign of the Joyita nor any of her passengers or crew was found.

The ship was partially submerged and listing heavily (her port deck rail was awash) and there was no trace of any of the passengers or crew; four tons of cargo were also missing.

The party that boarded the ship noted that the radio was discovered tuned to 2182 kHz, the international marine radiotelephone distress channel.

The electric clocks on board had mysteriously stopped at 10:25

The ships’ logbook, sextant, mechanical chronometer and other navigational equipment, as well as the firearms Miller kept in the boat, were missing.

A doctor’s bag was found on deck, containing a stethoscope, a scalpel, and four lengths of blood-stained bandages.

There was still fuel in Joyita’s tanks; from the amount used, it was calculated she made some 243 miles (391 km) before her engine stopped, probably just 50 miles (80 km) of Tokelau.

Although the Joyita was found with her bilges and lower decks flooded, her hull was sound.

Given the fact that the hull of the Joyita was sound and her design made her unsinkable, a main concern of investigators was determining why the passengers and crew did not stay on board if the events were simply triggered by the small flooding in the engine room. 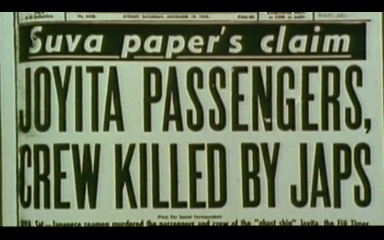 The Japanese did it!

The Fiji Times and Herald quoted at the time from an “impeccable source” to the effect that the Joyita had passed through a fleet of Japanese fishing boats during its trip and “had observed something the Japanese did not want them to see.”