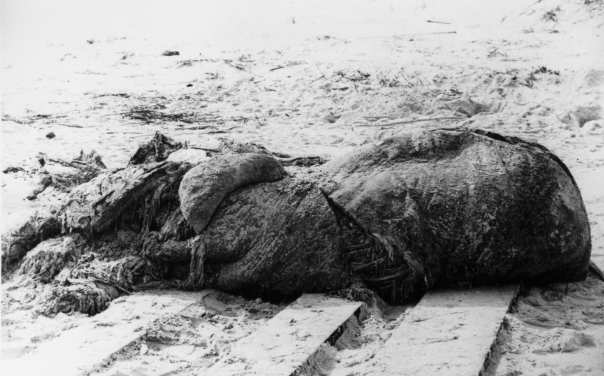 One evening in November 1896 two men were cycling along the coast just outside their hometown of St Augustine, Florida. As they looked over the beach, they noticed a huge carcass. It was 23 feet long, 18 feet wide, four feet high, and it seemed to have multiple legs. The two men decided to tell Dr Dewitt Webb, the founder of the St Augustine Historical Society and Institute of Science, who came to examine the corpse. Webb photographed the body, noting it was a silvery pink colour, and took samples. Webb recorded that the skin was axe-proof, being three and a half inches thick. He also estimated that the body weighed around six or seven tonnes.

It needed four horses and a whole team of people from the local community to drag it the painstaking 40 feet up the beach in order to keep it away from the rolling waves. Webb was convinced it was not part of a whale, and must have been some kind of unknown giant octopus, so he sent letters describing the carcass to many eminent scientists.

One such expert was Professor Verrill at the National Museum (now called the Smithsonian) in Washington DC. Verrill stated that the creature was actually a squid. When Webb sent him more information, he changed his mind and said it was an octopus. Verrill suggested it probably had tentacles around 100 feet long. Verrill refused to see the dead creature in person, or indeed to provide any funds or resources to help preserve the sea monster.

Even so, the professor decided this new species should be named after himself, calling it ‘Octopus Giganteous Verrill’. Finally, he changed his mind again after receiving tissue samples, and said the body was probably just the head of a sperm whale. Webb was disappointed and preserved as many samples of the creature as he could. Eventually the corpse was retaken by the sea. In the first days of December 1896, Dr. George Grant, owner of a hotel at South Beach on Anastasia Island, wrote a short article describing the carcass, which was published in the Pennsylvania Grit of Williamsport on December 13.

The article was accompanied by a picture of the “sea monster” depicting a tentacled creature with a tail. This was drawn by the draughtsman of the newspaper based on Grant’s description, and not an eyewitness. 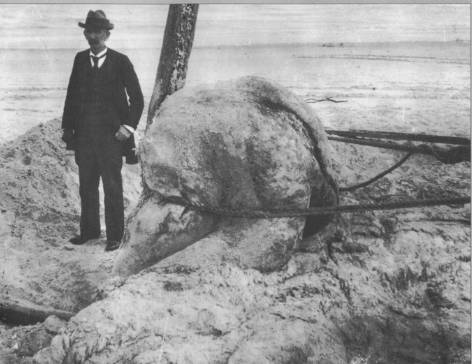 Dr. Webb and the remains of St. Augustine Monster

Grant’s description was as follows: The head is as large as an ordinary flour barrel, and has the shape of a sea lion head. The neck, if the creature may be said to have a neck, is of the same diameter as the body. The mouth is on the under side of the head and is protected by two tentacle tubes about eight inches in diameter and about 30 feet long. These tubes resemble an elephant’s trunk and obviously were used to clutch in a sucker like fashion any object within their reach. Another tube or tentacle of the same dimensions stands out on the top of the head. Two others, one on each side, protrude from beyond the monster’s neck, and extend fully 15 feet along the body and beyond the tail. The tail, which is separated and jagged with cutting points for several feet, is flanked with two more tentacles of the same dimensions as the others and 30 feet long. The eyes are under the back of the mouth instead of over it.

This specimen is so badly cut up by sharks and sawfish that only the stumps of the tentacles remain, but pieces of them were found strewn for some distance on the beach, showing that the animal had a fierce battle with its foes before it was disabled and beached by the surf. Grant describes the animal as having seven “tentacles” and a “tail”. If the “tail” is interpreted as another tentacle, giving a total of eight, this would suggest an octopus as opposed to a decapod such as the squid or cuttlefish. Furthermore, nothing in the description indicates the presence of the long feeding tentacles found in squid, as the “tentacles” are said to be of the same dimensions.

Between January 9 and January 15, a storm tide dragged the carcass out to sea, but it washed ashore again on the next tide, on Crescent Beach, two miles to the south of its original location. Webb sent photographs of the mass, along with a description, to Joel Asaph Allen of the Museum of Comparative Zoology at Harvard. Allen apparently did not respond, but Webb’s letter came to the attention of Prof. Addison Emery Verrill of Yale, at that time the foremost authority on cephalopods in the country. At first, Verrill suggested the carcass might represent the remains of a giant squid.

In the January 1897 issue of the American Journal of Science he wrote:The proportions [given by Webb] indicate that this might have been a squid-like form, and not an Octopus. The “breadth” is evidently that of the softened and collapsed body, and would represent an actual maximum diameter in life of at least 7 feet and a probable weight of 4 or 5 tons for the body and head. These dimensions are decidedly larger than those of any of the well-authenticated Newfoundland specimens. It is perhaps a species of Architeuthis. Verrill soon changed his mind about the identity of the creature.

In the January 3 issue of the New York Herald, he wrote that the carcass was indeed that of a giant octopus. However, the paper did not state that Verrill was the author of the article. The article read: Its head was nearly destroyed, and only the stumps of two arms were visible . . . The body, as it lies somewhat imbedded in the sand, is 18 feet long and about 7 feet wide, while is rises 3½ feet above the sand . . . The weight of the body and head would have been at least four or five tons. If the eight arms held the proportions usually seen in smaller species of the octopus, they would have been at least 75 to 100 feet in length and about 18 inches in diameter at the base.

On January 16, the Tatler, a local news sheet that reported on the visitors to St. Augustine hotels, ran a story about the stranded creature. It restated Verrill’s original identification of the carcass as a giant squid. It read: The wide-spread interest in the very remarkable specimen of the giant squid, now lying on the beach a few miles below the city, is mainly due to its enormous size. It is believed to be the largest specimen ever found. Its great size and immense weight have thus far prevented its being moved for a more careful examination. A dozen men with blocks and tackle not being able even to turn it over. Another effort will be made with more extensive apparatus by which it is hoped to drag it from the pit in which it now lies and placing it higher up on the beach so that a careful and thorough examination in the interest of science can be made and the exact species determined. Professor Verrill of Yale and Profs.

True and Dale [Dall] of the Smithsonian are in constant correspondence with Dr. DeWitt Webb, President of the St. Augustine Scientific, Literary and Historical Society, in regard to it. Several photographs have been taken of it, but owing to its position, these have not been satisfactory. Mrs. John L. Wilson believes it to belong to an extinct species. Its hide is three and a half inches thick and its head is covered by a hood that prevents examination. Apparently it is a mass of cartilage and may have been dead in the water many days before it washed ashore on Anastasia Island.

In the February issue of the American Journal of Science, Verrill even gave the animal a scientific name, Octopus giganteus (Verrill, 1897). He also added: It is possible that it may be related to Cirroteuthis, and in that case the two posterior stumps, looking like arms, may be the remains of the lateral fins, for they seem too far back for the arms, unless pulled out of position. On the other hand, they seem to be too far forward for fins. So that they are probably arms twisted out of their true position. However, having examined samples of the mass sent to him by Webb, Verrill concluded that “the creature cannot be an Octopus, but is of cetacean nature.” He suggested that “the whole mass represents the upper part of the head of [a sperm whale], detached from the skull and jaw.” Webb decided the carcass should be moved further inland so that it would not be lost to the sea forever.

With the help of “six horses and strong tackle” it was moved several miles nearer to St. Augustine, “to the terminus of a railroad,” where it was protected from the tide and drifting sand. Its final resting place was South Beach, Anastasia Island, near to the hotel of Dr. George Grant. The St. Augustine carcass became somewhat of a tourist attraction and was visited by large numbers of people. It is unknown what happened to the carcass afterwards.