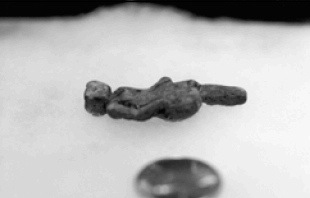 The July 1889 find in Nampa, Idaho, of a small human figure during a well-drilling operation caused intense scientific interest last century. Unmistakably made by human hands, it was found at a depth (320’) which would appear to place its age far before the expected arrival of man in this part of the world, according to accepted evolutionary dating techniques. Although all but forgotten by the general scientific community, the evidence, when viewed without evolutionary bias, still sounds convincing over a century after its discovery. 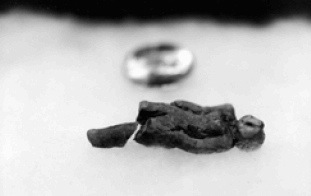 The small “doll” is composed of half clay and half quartz, and according to at least one expert, Professor Albert A. Wright of Oberlin College, it was not the product of a small child or amateur, but was made by a true artist. Though badly battered by time, the doll`s appearance is still distinct: it has a bulbous head, with barely discernible mouth and eyes: broad shoulders: short, thick arms: and long legs, the right leg broken off. There are also faint geometric markings on the figure, which represent either clothing patterns or jewelry -they are found mostly on the chest around the neck, and on the arms and writs. The doll is the image of a person of a high civilization, artistically attired.

Unlike the many ancient human artifacts and bone finds in the gold-bearing gravels in the Sierra Nevada Mountains of California last century (Gentet, 1991), the Nampa Image was a sole clue to an ancient landscape now buried deeply under the surface. As such, it is more difficult to claim it as excellent evidence of ancient man in North America.

Nevertheless, the evidences for the genuineness of the Nampa Image seem weighty. The condition of the image would present a very sophisticated challenge for someone on the early frontier. And the workings of the sand pump, which was in operation at the discovery of the image, excludes it being introduced during the on-going operation from on top and surviving. Furthermore, while one might envision a motive for a hoax (though the idea of a hoax to promote the new frontier town was never mentioned by any other writer the authors researched), the people involved were always described as citizens of stature in the community and trusted in their words.

There is, however, always the possibility that all is not as it first seems to be. Perhaps we will never know for sure, but this much we do know: had the find come from a geologic horizon where man’s artifacts were expected, there would have been far less controversy involved. The current theories of evolution and the stretched out geologic timetable should not hinder acceptance of human artifacts or bones found in stratum where conventional “wisdom” prohibits. 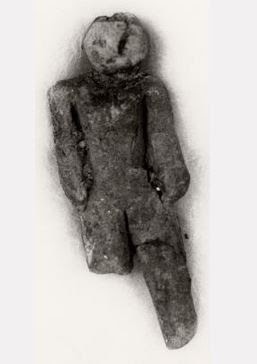