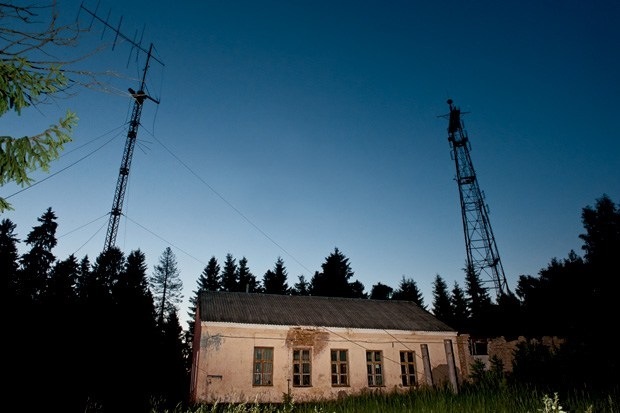 UVB-76, also known as The Buzzer, is the nickname given by radio listeners to a shortwave radio station that broadcasts on the frequency 4625 kHz.

It broadcasts a short, monotonous buzz tone repeating at a rate of approximately 25 tones per minute, for 24 hours per day. On rare occasions, the buzzer signal is interrupted and a voice transmission in Russian takes place.

It has been active since at least the late 1970s or early 1980s, when the first reports were made of a station on this frequency. Its origins have been traced to Russia, but although several theories with varying degrees of plausibility exist, its actual purpose remains unknown to the public.

Frequently, distant conversations and other background noises have been heard behind the buzzer, suggesting that the buzzing tones are not generated internally, but are transmitted from a device placed behind a live and constantly open microphone. It is also possible that a microphone may have been turned on accidentally. One such occasion was on November 3, 2001, when a conversation in Russian was heard

At 2225 UTC on September 1, 2010, the buzzer was interrupted by a 38-second fragment of “Dance of the Little Swans” from Tchaikovsky’s ballet Swan Lake. Four days later on September 5 at 1230 UTC, a female voice was heard counting from one to nine in Russian; just over an hour later, at 1339 UTC, the buzzing silenced for a quiet male voice to read a voice message.

On November 11, 2010, intermittent phone conversations were accidentally transmitted and were recorded by a listener (at 1400 UTC) for a period of approximately 30 minutes. These conversations are available online, and seem to be in Russian, but have not yet been publicly translated – The phone calls mentioned the “brigade operative officer on duty”, the communication nodes “Debut”, “Nadezhda” (Russian for “hope”, both a noun and a female name), “Sudak” (a kind of river fish and also a town in Crimea) and “Vulkan”.

Unusual changes in the buzzing sound have also been noted. On one occasion on April 9, 2011, the device responsible for generating the buzzing apparently malfunctioned.On October 27 that same year, a second buzzing sound was heard on the same frequency, interfering with the first.

In June 2012, the buzzing was interrupted by a strange unexplained static data transmission for 63 minutes.

There is much speculation about the transmitter site. It appears it is located near Povarovo, Russia[28] at 56°5?0?N 37°6?37?E which is about halfway between Zelenograd and Solnechnogorsk and 40 kilometres (25 mi) northwest of Moscow, near the village of Lozhki.

The location and callsign were unknown until the first known voice broadcast of 1997. In 2011 a group of urban explorers explored the abandoned buildings at Povarovo. They claim that it is an abandoned military base. A radio log record was found, confirming the operation of a transmitter at 4625 kHz. – however the explorers have never been heard from again.