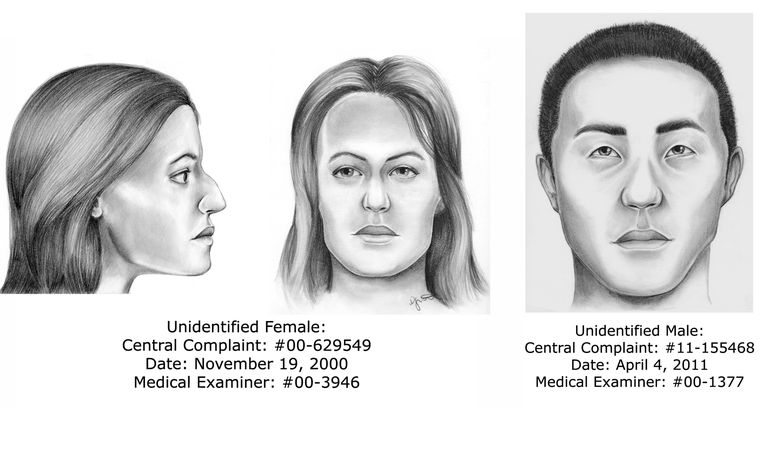 The Long Island serial killer is an unidentified suspected serial killer who is believed to have murdered 10 to 16 people associated with prostitution, over a period of nearly 20 years

Oak Beach, Long Island is a small, semi-secluded community located 35 miles from Manhattan on the eastern end of the barrier island called Jones Beach Island. It is part of the town of Babylon in Suffolk County, New York.

The residents of Oak Beach are wealthy by most standards. The average home with a view of the water is priced at around $700,000 to $1.5 million for a home on the water. The crime rate is minuscule, at least until May 2010 when Shannon Gilbert, a 24-year-old escort advertising on Craigslist disappeared after running from a client’s home in Oak Bridge.

According to Gilbert’s client Joseph Brewer, the young escort began to fall apart while at his home. Suffering from bipolar and reportedly not taking her medication, Gilbert called 9-1-1 from Brewer’s home and talked for over 20 minutes. At one point she told the 9-1-1 operator, “they’re trying to kill  me.”

Brewer later told the police that he was unable to calm Gilbert down and asked her driver, Michael Pak, to help get her out of the house.

Gilbert ended up fleeing both men and began knocking on nearby neighbor’s doors, screaming and pleading for help. The police were called, but when they arrived Gilbert had vanished into the night. Where she disappeared to remained a mystery for over a year.

A Discovery by Chance

On December 10, 2010, police detective John Mallia was training his cadaver police dog when he discovered a burlap sack buried down in the marshes of Gilgo Beach. Inside the sac were the skeletal remains of a woman, but it was not Shannon Gilbert. A search of the area turned up four more skeletal remains in December.

From March through May 2011, detectives from Nassau County, Suffolk County, and the New York State Police returned to the area and worked together to search for more victims. They discovered the remains of six more victims, including the body of a small toddler girl. All of the remains were found approximately a mile apart and about five miles from where the other victims that were found in December.

The news media was quick label the killer as the “Long Island Serial Killer” and the police agreed that they likely had a serial killer in the area. In June 2011, investigators offered a reward of $25,000  (up from $5,000) in exchange for information that would lead to the arrest of the person responsible.

On a map, the locations of the victims’ remains, some just partial remains, are like dots scattered along the Ocean Parkway that leads to Jones Beach. Up close it was a macabre scene as detectives dug through the thick bramble that covered the marsh. When they finished they had the partial remains of eight female victims, one male victim dressed as a woman, and the toddler.

It was not until a year later, on December 13, 2011, that the remains of Shannon Gilbert would be found in the same area.

Police later reported that all of the victims appeared to be sex workers who advertised their services on Craigslist. They suspect that the toddler was the child of one of the women. At first, believing that the area had become a dumping ground for a pair of serial killers, the investigators later retracted that statement, saying instead that it was the work of one killer.

Investigators do not believe that Shannon Gilbert was killed by the serial killer, but by natural causes, after she became disoriented and lost in the marsh. They believe that she most likely drowned. Her mother does agree, particularly since Shannon was found face up, which is unusual for drowning victims

The First Victims That Were Identified

Maureen Brainard-Barnes, 25, of Norwich, Connecticut, was last seen on July 9, 2007, after leaving Norwich to go to New York City. Maureen worked as an escort and advertised on Craigslist. She was a small woman, only four feet eleven inches tall and one hundred five pounds. She got into the escort business because she needed money to pay for her home. Once she caught up on her mortgage she left the sex industry for seven months but returned to it after receiving an eviction notice. Her remains were found during the December 2010 search.

Melissa Barthelemy, 24, of Erie County, New York, was last seen on July 10, 2009. Melissa worked as an escort and advertised on Craigslist. Her last known activity was on July 10 when she met up with a client, made a bank deposit of $900 into her account. She then called an old boyfriend, but he did not answer. After a week that she went missing and for five consecutive weeks after that, her young sister received phone calls from someone using Melissa’s cell phone. The sister described the anonymous caller as  “vulgar, mocking and insulting” and she suspects the caller was the person who killed her sister.

Megan Waterman, 22, of South Portland, Maine, disappeared on June 6, 2010, after advertising her escort services on Craigslist. Megan was staying at a motel in Hauppauge, New York, which is located 15 miles from Gilgo Beach. Her remains were discovered in December 2010.

Amber Lynn Costello, 27, of North Babylon, New York, went missing on September 2, 2010. North Babylon is located just 10 miles north of Gilgo Beach. Amber was a heroin user and a sex worker. On the night that she vanished, she had received several calls from a client offering to pay her $1,500 for her services. Her sister, Kimberly Overstreet, also a sex worker at one time, reportedly said in 2012, that she would continue to use Craigslist in the same manner as her sister, in an effort to catch her sister’s killer.

Jessica Taylor, 20, from Manhattan, vanished in July 2003. It was known that Jessica had worked in New York and Washinton D.C. as a sex worker. On July 26, 2003, her partial remains were found in Manorville, New York, which is located about 45 miles east of Gilgo Beach. Her nude chopped up torso was found and the head and hands were missing. On March 29, 2011, her skull, hands, and a forearm were found at Gilgo and identified through DNA.

Jane Doe No. 6: The right foot, both hands, and a human skull, were found on April 4, 2011. The rest of the unidentified victim’s remains were found in the same area where Jessica Taylor’s partial remains were found in Manorville, New York. Investigators believe that Jane Doe No. 6 was probably a sex worker. Police believe the same person is responsible for the death of both of the victims. Similar methods were used to dispose and disperse the women’s remains.

Police released a composite sketch of Jane Doe No. 6. She was between the ages of 18 and 35 and was around five feet, two inches tall.

John Doe: The remains of a young Asian male, between the ages of 17 and 23, were discovered on April 4 at Gilgo Beach. It appeared that he had been dead for five to 10 years. The cause of death was blunt-force trauma. Investigators believe he may have worked in the sex industry. At the time of his death, he was wearing women’s clothing.

A composite sketch of the victim was released. Police say that he was around five foot, six inches and he was missing four teeth.

Baby Doe: Located around 250 feet from Jane Doe No. 6, investigators discovered the remains of a female toddler between the ages of 16 and 24 months old. DNA tests determined that the toddler’s mother was “Jane Doe No. 3″, whose remains were found 10 miles east, near Jones Beach State Park. It was reported that she was non-Caucasian” and was wearing earrings and a necklace at the time that she was murdered.

Peaches and Jane Doe No 3: On April 11, 2011, Nassau County police found the dismembered skeletal remains in Jone Beach State Park. The remains were stuffed inside of a plastic bag. The victim was named Jane Doe No 3.

On June 28, 1997, the dismembered torso of a young Black female was found in Lakeview at Hempstead Lake State Park. The torso was discovered inside a green plastic container which had been dumped next to the road that ran alongside the west side of the lake. The victim had a tattoo of a peach shaped ?like a heart that had a bite out of it and there were two teardrops on her left breast.

DNA analysis identified that Peaches and Jane Doe No 3 were the same person and that she was the mother of Baby Doe. 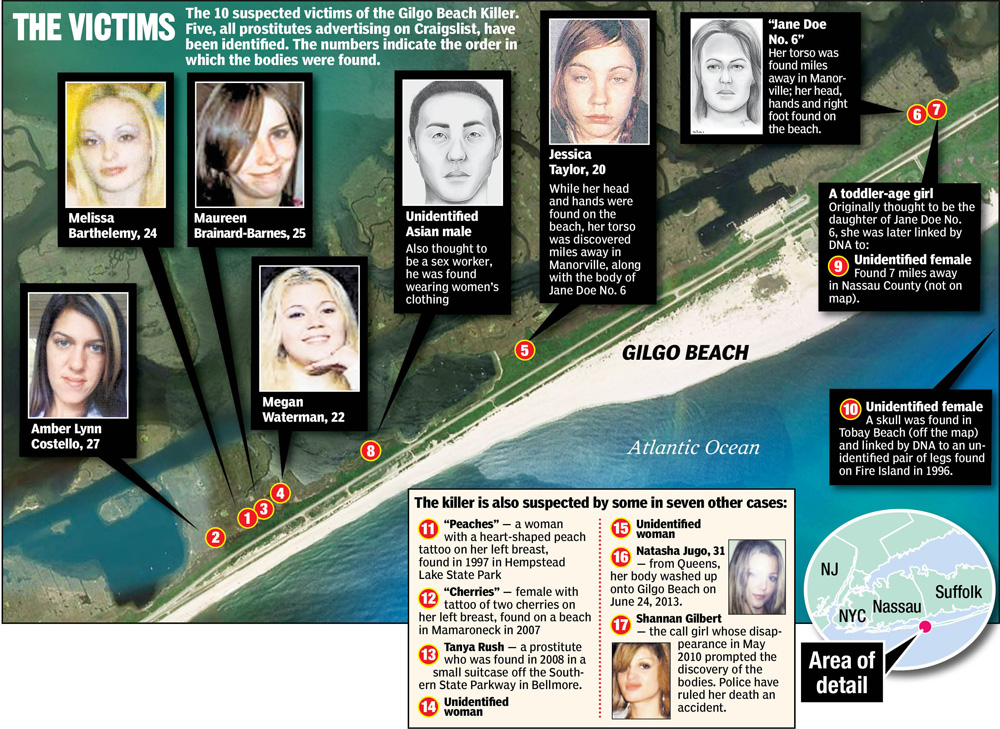 Jane Doe No. 7: Located near Tobay Beach, a human skull and several teeth were found on April 11, 2011. DNA testing showed that these remains belonged to the same person whose severed legs had been found on Fire Island on April 20, 1996.