Described as the Leonardo da Vinci of mental manipulation, “guru” Thierry Tilly duped a reclusive French family out of more than $6 million, including their chateau.

In 1999, Ghislaine was looking for someone to help her update her Paris-based secretarial school’s computer system. A lawyer friend had recommended the services of Tilly to her; he said he was well-versed in such matters. In fact, the friend had wanted Tilly to get the job because Tilly owed him money.

So one day, Tilly appeared at La Femme Secrétaire on the Rue de Lille in Paris’s Seventh Arrondissement. At first, Ghislaine was impressed with the clean-cut, apparently competent Tilly, and made the mistake of confiding in him: she told him her husband, Jean, was depressed and her son, François, a failure. Other tensions were simmering in the family, to do with the inheritance of the chateau following the death of Ghislaine’s father in 1995. Tilly was all ears. Says Ghislaine: “If we’d been a unified family, Tilly would never have gained a hold over us.” Soon Marchand suspected his wife and her “guru” of having an affair.

In mid-2000, Ghislaine invited Tilly to attend the Monflanquin Music Festival, of which she was the chief organiser. Quite naturally, she asked him to dine at the chateau and meet the family. It was during this visit that he revealed that his job at La Femme Secrétaire was nothing more than a cover. Now presenting himself as a “special agent in the service of France”, Tilly boasted to the Védrines of his NATO connections. They could call upon his services whenever they needed him.

The chateau, which was, behind its genteel exterior, a hotbed of hidden rivalries and jealousies, was fertile ground for the plentiful and imaginative lies that Tilly spun, and the Védrines gravitated towards his energy. When the young Amaury was caught smoking marijuana in the city, Tilly told him to retreat to the chateau for a few days where there would be no peer pressure to indulge. When Christine started putting on weight, Tilly instructed her to start exercising in the forest surrounding it. To the Védrines, it seemed that their new friend could arrange anything.

One day, he explained the family were in serious danger from sinister forces. He told them they were the lost descendants of an ancient order, an offshoot of the Knights Templar, called “L’Équilibre du Monde” (the “Balance of the World”), an organisation only called into being when the world faces extreme evil.

All were taken in except one: Jean Marchand. When he tried to warn his wife that Tilly, who had been working for her since 1999, was a pervert and a charlatan, she divorced him on orders emailed to her by Tilly in the autumn of 2001.

Marchand was escorted to the edge of the family property, whereupon Ghislaine threw down on the lawn a glove and a bouquet of dried flowers, a sign that he had been recognised as an agent of “evil”. By the time Marchand had returned to his home at Fontenay, outside Paris, Ghislaine had emptied their joint accounts.

At the height of the scam, Tilly maintained two flats, one in London and the other in New York. Gonzalez began to collect rare and fine wines and received a Rolex wristwatch as a gift from Tilly. When Gonzalez was arrested in Paris, the police found €86,000 ($107,000) stuffed in a trunk. Between them, the men purchased a BMW 645 and rented three other vehicles to use from their bases in Paris (Gonzalez) and London (Tilly).

In the end, out of a family fortune of nearly €5 million (about $6.2 million), only €220,000 ($274,000) has been recovered and much more is suspected of being stowed in bank accounts in the Cayman Islands with, according to Picotin, very little hope of it ever being recovered.

Tilly’s real feat was organising the sequestration of the entire Védrines family from his home in the UK, where he resided throughout the affair. (Nobody in the village of Monflanquin remembers even seeing le gourou.) By 2003, all 11 members of the Védrines family had left the chateau and moved into Philippe’s home at Talade, north of Monflanquin, where they lived with the shutters closed between 2003 and 2008. Tilly forbade the use of all timepieces and calendars, says Marchand, to further disorientate his victims. “He wanted to cut them off from the world.”

Throughout their seclusion, Tilly telephoned, faxed or emailed the isolated family, on average, 40 times a day from across the Channel, demanding updates on their activities. The presence of a few journalists already alerted to the story by Marchand only reinforced Tilly’s assertions that the family were under close scrutiny by his conspiracy of malign forces.

The strange case and death of Stephen McKerron.

The strange case of John and Adeline Santos. 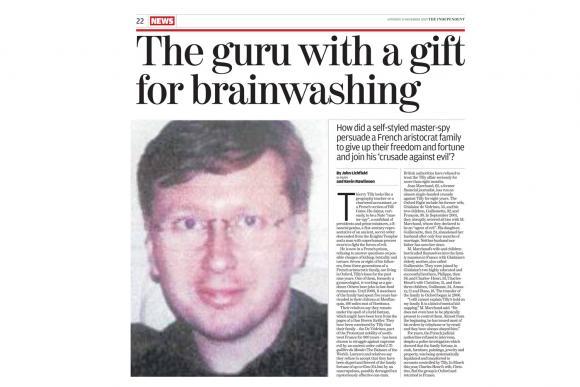