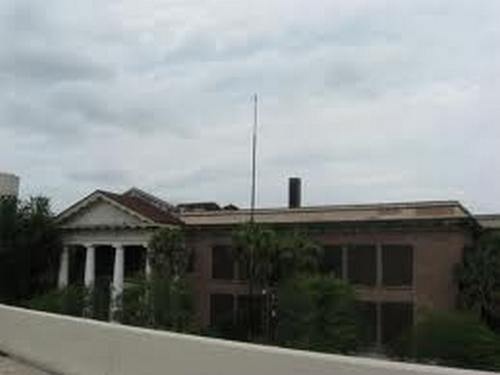 While hardly the only haunted/abandoned school in the country, what makes Devil’s School unique is just how horribly over the top the legends about it go. Original designated as Public School #4, the school gained it’s Devil moniker from one (or all) of the following stories.

First, a furnace blew up sometime in the 1960’s, killing several students and faculty. The halls became haunted by these restless spirits and teachers refused to come in, forcing the district to shut it down.

Second, the principal was a secret cannibal. Students who fell asleep in class were sent to his office and were never seen again. The office closet had been converted to a meat locker and his victims were skinned and hung on meat hooks until he could find a fifteen minute lunch break to eat their flesh.

Third, and a little less imaginative, is the story of a janitor who just up and went batshit, slaughtering students in the hallways with little reason except that he’s a janitor and janitors are naturally crazy.

A little odd that none of that made national news, but whatever. Another story claims that it was a school that was shut down due to budget cuts. Shortly afterward Satanists moved in and Devil’d up the joint. Investigators have reported Satanic graffiti on the walls and a tree growing in the center of the building.