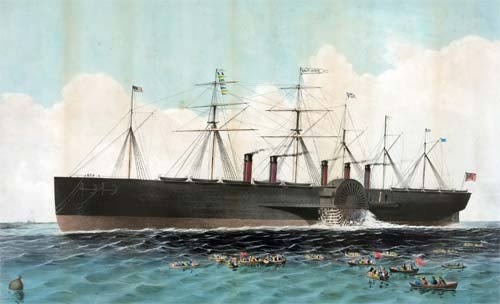 The Great Eastern was the Titanic of its day. Built in 1857, at 100,000 tons it was six times larger than any ship ever built and, like the Titanic, seemed destined for trouble. When its builders tried to launch it on January 30, 1858, it was so heavy that it jammed the launch mechanism and stopped dead. Even though it was eventually put afloat, it lay in harbor for about a year because the money had run out to finish it.

The Great Eastern was then bought by the Great Ship Company, which finished it and put it out to sea. During its final phase of construction a number of men, including the master shipwright vanished whilst on board.

Then, during its sea trials, a huge ventilator explosion killed at least one man and scalded several others with boiling water. One month later, its builder, Isambard Kingdom Brunel, died of a stroke. Despite its size, the cursed ship never carried a full complement of passengers, not even on its maiden voyage. On her fourth voyage, it was badly damaged in a storm, necessitating costly repairs.

In 1862, while carrying its record number of passengers – 1,500 – it sailed over an uncharted area and tore open its bottom… saved from sinking only by its double hull.

On several occasions during its early voyages, a strange hammering noise of an unknown source could be heard far below decks. The crew said it could be heard even above the gale of a storm and sometimes woke sailors from their sleep.

The ship continued to lose money for its owners, but was successful in helping lay a transatlantic cable in 1865. Better ships built for the purpose soon replaced the Great Eastern, however, and for 12 years it sat rusting until it was eventually sold for scrap metal. As it was being taken apart, the source of the ship’s bad luck, perhaps (and the phantom hammering), was discovered: within the double hull was the skeleton of the master shipwright who had mysteriously disappeared during construction.