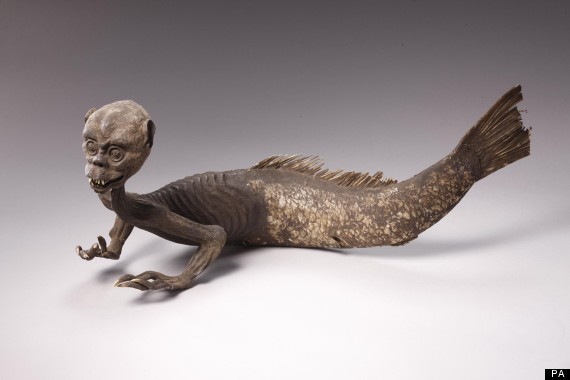 On the morning of May 9, 1868 the fishing boat Santa Monique emerged from the grey mists of the Atlantic and sighted her home port of Tomancha, a small fishing village between the cities of Bilbao and Gijon on the north coast of Spain. She was a day overdue. The rough seas of the Bay of Biscay had torn away part of her keel and the crew manned the pumps constantly to keep her afloat.

But her nets had remained intact and she had a passable catch of plaice and whiting. More important, she had caught something which was to make the ship and crew a legend along the north Spanish coast and spark off a controversy which exists to this day. For in the hold, securely tied inside a fishing net, was claimed to lie a creature which until then had only been found in legends and fables. Yet in the coming weeks at least 1,000 people testified that what Captain Tomas Cinoda had brought ashore from the Santa Monique was a living breathing merman…

Today there are still in existence newspaper reports of the alleged incident with sketches and diagrams of a creature which certainly looks like a merman was supposed to look, and the people of Tomancha apparently had no doubts. While the boat was tying up, rumours had already started to spread like wildfire and the local guardia came down from his police station to be told an incredible tale. And when he was taken by Captain Cinoda to view the merman he was apparently deeply impressed.

“It has the head and chest of a man and a body of a fish,” he announced to the highly-excited waiting crowds.” It is a fearsome beast and in such a rage that nets and ropes can hardly contain him.” He ordered that all women and children be moved back from the quay as the merman was carried from the ship to the police station — the only building considered strong enough to contain him.

Later in the day, long poles were put through the net and the merman was carried through the town. Hundreds stood in awe as the bizarre procession went by.

A local newspaper reporter from Bilbao reported that the creature “looked angrily through the net at the crowds and moved sluggishly from time to time but seemed to make no effort to escape.”He said that it appeared to be about six feet in length and a greenish-yellow in colour. The head was sunk deep into the shoulders and covered with a matted mane of hair.

“At the bottom of the torso were greenish-blue scales which then narrowed into a tail about three feet in length with large triangular fins.” There was no doubt, said the reporter, that it was not a fish. Nor could anyone say that it was a man. A merman seemed the only possible description. The creature was put into a room at the back of the police station to await the arrival of a senior officer from Bilbao. That evening Lt Juan Constanta arrived to look over the creature and make an official report.

Meanwhile the merman, wrapped in a wet sheet and placed on the stone floor, was receiving the first of several hundred visitors. Eye witnesses reported that his appearance was hardly attractive. The face was almost flat and the eyes were on the side of the head, as in a fish. He had thick rubbery lips and apparently no teeth. In the meantime, a fierce argument was going on about the ownership of the merman… Captain Cinoda claimed it was his and had plans for making it into a fairground exhibit. But Lt Constanta declared he was taking it into custody on behalf of the Navarra Province.

At midnight the argument was postponed and the merman locked up. The next morning he was offered a plate of raw fish and a jug of water but refused them both. Observers noticed that his skin was now taking on a white flaking quality which further wet blankets failed to remedy.

The merman was now lying motionless on the floor, his eyes occasionally moving and his breathing shallow. A doctor persuaded to examine the creature said that the merman’s temperature was about half that of a normal human being and he concluded that it was cold-blooded.

On May 12, further contingents of sight-seers arrived at the village to find the merman in pretty poor shape. He had eaten and drunk nothing since his arrival and had not moved or made any noise. When Lt Constanta made a routine inspection at midnight he found the merman had turned over on his face. A doctor was called and the creature was found to be dead. The next day the body was taken by closed cart to the hospital at Bilbao and dissected. It was said to have all the breathing apparatus of a fish but the digestive organs of a man.

A series of papers were written for medical journals and eventually the strange phenomenon disappeared from the headlines.

Was it really a merman? Today, no one knows. All that remains are a few newspaper sketches and some contemporary reports. But the true identity of the creature remains as vague and mysterious as the misty ocean from where it came. 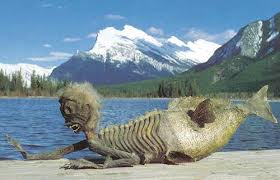