On May 25, 2003 at Quatro de Feveriro International Airport in Angol, shortly before sunset on a clear day, Ben Charles Padilla was seen boarding a Boeing 727 that he had previously been hired to work on.

The Boeing had been manufactured in 1975 and had formerly been owned by American Airlines. Its owner in May 2003 was Miami-based company “Aerospace Sales & Leasing” and the aircraft carried tail number N844AA.

The Miami company had leased the plane to TAAG Angola Airlines. N844AA had been grounded and sat idle at Luanda Airport for 14 months, accruing more than $4 million in backdated airport fees. The plane was one of two at Quatro de Fevereiro Airport in the process of being converted for use by IRS Airlines.

The FBI files described the plane as “…unpainted silver in color with a stripe of blue, white, and blue. The plane was formerly in the air fleet of a major airline, but all of the passenger seats have been removed. It is outfitted to carry diesel fuel.”

Also seen boarding the plane that evening with Padilla was a helper he had recently hired, John Mikel Mutantu, from the Republic of the Congo. The two had been working with Angolan mechanics to return the 727 to flight-ready status, but neither could fly it. Mutantu was not a pilot, and Padilla had only a private pilot’s license.

According to press reports, shortly after the me. Had been seen to board the plane, the aircraft began unauthorised taxiing. No communication was made between the unknown crew and the tower; the plane was seen maneuvering erratically, it then entered onto a runway without clearance.

With its lights off and its transponder not transmitting, N844AA took off to the southwest, and headed out over the Atlantic Ocean.

The tower continued to try to make contact, but there was no response, and the tracking transponder remained turned off. A short time later Air Traffic control lost sight of the aircraft.

It should be noted that a Boeing 727 ordinarily requires three trained aircrew, and it is claimed it is almost impossible to fly with a crew of just two. According to later reports, the Boeing 727 flight manuel does have emergency flying procedures to enable a crew of two to fly the plane.

The Boeing 727 and the two men have not been seen since. 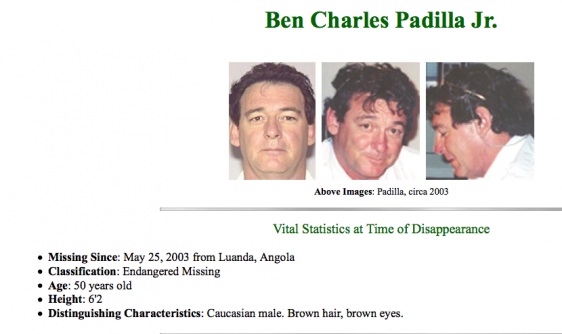 As this was just following 9/11 U.S. investigators spent months searching for the plane.

The FBI at first concluded that the Boeing 727 that had just mysteriously disappeared had likely crashed. No evidence of this was, or has ever been discovered however.

The FBI then suggested the plane had been flown to a remote hangar to be stripped for parts.

CIA intelligence officials also expressed fears that the 153-foot , 200,000-pound aircraft might have been stolen by terrorists for use as a weapon against Western targets in Africa. But an examination of satellite photographs and visits to dozens of African airfields failed to yield any evidence that it is on the continent, leading U.S. officials to largely discount the terrorism scenario.

Theories on the missing plane

In July 2003 a possible sighting of the missing plane was reported in Conakry, Guinea.

In August 2003 a reported sighting of the plane on an airfield at Kankan Airport, Guinea.

Another theory is that the 727’s owners decided to make the aircraft disappear to collect the insurance money. It has been documented that the plane was in a terrible state, and the insurance overvalued the plane.

But if that’s case, then what happened to Padilla and his assistant?

A ground search was also conducted by diplomats stationed in Nigeria at multiple airports without finding it.

The telegram from Nigeria also states that the diplomats did not consider likely a landing of the 727 at a major airport, since the aircraft could have been easily identified.