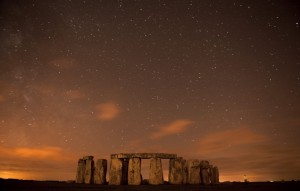 Stonehenge is surely Britain’s greatest national icon, symbolizing mystery, power and endurance. Its original purpose is unclear to us but some have speculated it was a temple made for the worship of ancient Earth (pagan?) deities. It has also been called an astronomical observatory for marking significant events on a prehistoric calendar. Others claim it was a sacred site for the burial of high-ranking citizens from societies of long ago. While we can’t say with any degree of certainty what it was for, we can say it wasn’t constructed for any casual purpose. Only something very important to the ancients would have been worth the effort and investment that it took to construct Stonehenge. 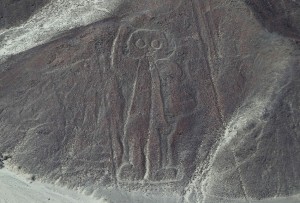 The Nazca Lines are the most outstanding group of geoglyphs in the world. Etched in the surface of the Peruvian desert, patterns outlining about 300 hundred figures, animals and birds, made of straight lines and geometric shapes… are visible only from the air! The massive-scaled geoglyphs also include stylized human-like forms. The fact that the lines, believed by some to be as old as 200BC, can only truly be appreciated from the air, has left generations mystified, as to how these could actually have been constructed and… just what they were meant for! 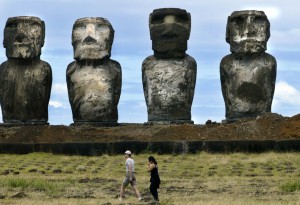 It is one of the most isolated islands in the world but 1200 years ago a double-hulled canoe filled with seafarers from a distant culture landed upon its shores. Over the centuries, a remarkable society developed in isolation on the island – on Easter Island. For reasons still unknown they began carving giant statues out of volcanic rock. These monuments, known as “moai” are some of the most incredible ancient relics ever discovered. The people of Easter Island called themselves the Rapa Nui. Science has learned much about the enigma of Easter Island and has put to rest some of the more bizarre theories but questions and controversies remain. 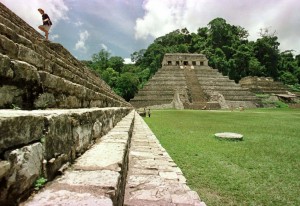 Deep within the jungles of Mexico and Guatemala and extending into the limestone shelf of the Yucatan peninsula lie mysterious temples and Mayan pyramids. The Mayan civilization was one of the most baffling ancient civilizations of all time. Until now, no one is certain who the Mayan were, how they lived and the reason behind the sudden collapse of their civilization.