This portrait of “The Brown Lady” ghost is arguably the most famous and well-regarded ghost photograph ever taken. The ghost is thought to be that of Lady Dorothy Townshend, wife of Charles Townshend, 2nd Viscount of Raynham, residents of Raynham Hall in Norfolk, England in the early 1700s. It was rumored that Dorothy, before her marriage to Charles, had been the mistress of Lord Wharton. Charles suspected Dorothy of infidelity. Although according to legal records she died and was buried in 1726, it was suspected that the funeral was a sham and that Charles had locked his wife away in a remote corner of the house until her death many years later.

This photograph was taken in 1963 by Reverend K. F. Lord at Newby Church in North Yorkshire, England. It has been a controversial photo because it is just too good. The shrouded face and the way it is looking directly into the camera makes it look like it was posed – a clever double exposure. Yet supposedly the photo has been scrutinized by photo experts who say the image is not the result of a double exposure.

The Reverend Lord has said of the photo that nothing was visible to the naked eye when he took the snapshot of his altar. Yet when the film was developed, standing there was this strange cowled figure.

The Newby Church was built in 1870 and, as far as anyone knows, did not have a history of ghosts, hauntings or other peculiar phenomena. Those why have carefully analyzed the proportions of the objects in the photo calculated that the specter is about nine feet tall! 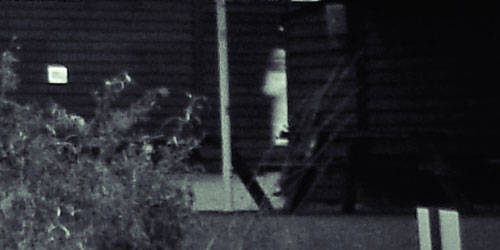 This amazing photo was taken by photographer and graphic designer Neil Sandbach in 2008. Neil was photographing some scenic shots at a farm Hertfordshire, England, as part of a project for wedding stationery; the couple planned to have their wedding ceremony held there.

Later, Neil was astonished when he examined the digital photo on his computer. There, as if peeking around a corner at him, is a ghostly, white, almost glowing figure of what looks like a child. Neil says he is quite sure there was no one there at the time.

There is further corroboration that this is a true ghost photo. Neil had shown the couple the anomalous photo, and before the wedding they asked the staff at the farm if they had ever had any spooky experiences there. They did not mention Neil’s photo. Indeed, they admitted that the figure of a young boy, dressed in white night clothes, had been seen on several occasions around the barn.

Apparently, this is the ghost that Neil photographed.