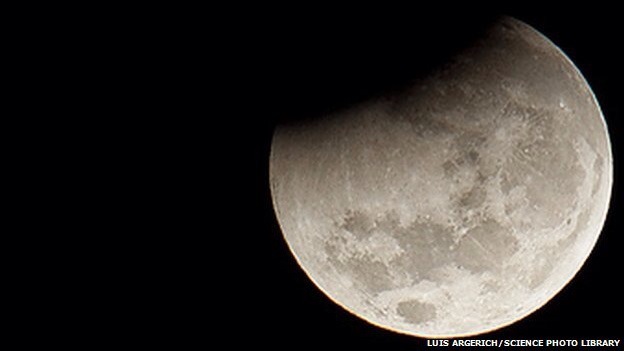 Researchers have found evidence of the world that crashed into the Earth billions of years ago to form the Moon.

Analysis of lunar rock brought back by Apollo astronauts shows traces of the “planet” called Theia.

The researchers claim that their discovery confirms the theory that the Moon was created by just such a cataclysmic collision.

The study has been published in the journal Science.

The accepted theory since the 1980s is that the Moon arose as a result of a collision between the Earth and Theia 4.5bn years ago.

Theia was named after a goddess in Greek mythology who was said to be the mother Selene the goddess of the Moon. It is thought to have disintegrated on impact with the resulting debris mingling with that from the Earth and coalescing into the Moon.

It is the simplest explanation, and fits in well with computer simulations. The main drawback with the theory is that no one had found any evidence of Theia in lunar rock samples.

Now a more refined analysis of Moon rock has found evidence of material thought to have an alien origin.

According to the lead researcher, Dr Daniel Herwartz, from the University of Goettingen, no one has found definitive evidence for the collision theory, until now.

“It was getting to the stage where some people were suggesting that the collision had not taken place,” he told BBC News.

“But we have now discovered small differences between the Earth and the Moon. This confirms the giant impact hypothesis.”

“What you are looking for is a much bigger difference, because that is what the rest of the solar system looks like”

But the difference, some say, could be explained by material absorbed by the Earth after the Moon formed.

And Prof Alex Halliday of Oxford University, is among many scientists who are surprised at the difference between the Theian material found in the Moon rock and the Earth is so small.

“What you are looking for is a much bigger difference, because that is what the rest of the Solar System looks like based on meteorite measurements,” he said.

Dr Herwartz measured the difference in what is called the isotopic composition of the oxygen contained in rocks on Earth and Moon rock. This is the ratio of different forms of oxygen.

Studies of meteorites from Mars and the outer solar system show that these ratios are markedly different -rather like a fingerprint. So Prof Halliday and others are puzzled by the fact that the fingerprints of Earth and Theia seem almost identical.