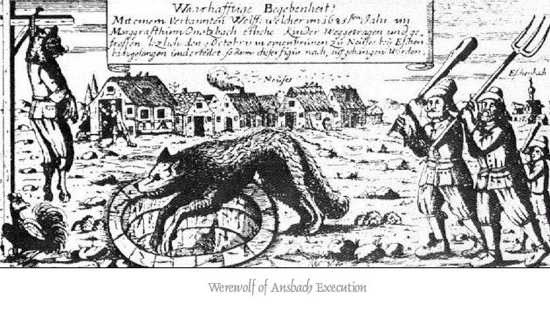 In 1685 the Bavarian town of Ansbach was being terrorized by a large vicious wolf. The rumors were that the wolf was actually a werewolf whose identity was that of the town’s dead mayor. When the wolf was killed, the people of Ansbach dressed the wolf’s carcass to resemble their mayor. It was then put on display in the town square and later moved to a museum. 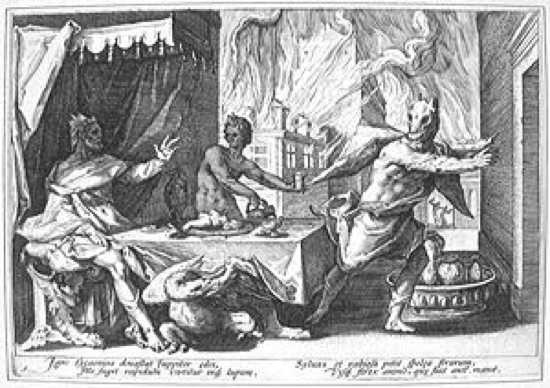 In earlier times there were extensive forests rich with game in the vicinity of Klein-Krams, near Ludwigslust, Germany. Great hunts were held in the area by sportsmen who came from all over Germany to test their prowess at bringing down their choice of game. For years, however, the hunters had been stymied by the appearance of a great wolf that seemed impervious to any bullet. Sometimes the beast would taunt them by approaching within easy shooting distance, on occasion even adding to the mockery by snatching a piece of their kill, then dash away without a bullet seeming to come anywhere near it.

Now it happened during one great hunt that one of the participants, a young cavalry officer, was traveling through the village when his attention was captured by a group running and screaming out of a house. Seeing nothing pursuing them that would cause such panic, he stopped one of the youngsters and asked what the matter was. The child told him that no adult from the Feeg family was at home except for their young son. When he was left alone, it was his custom to transform himself into a werewolf and terrorize the neighborhood children. They all ran away when he achieved such a transformation because they didn’t want him to bite them.

The officer was bemused by such wild play of the children’s imaginations, that he assumed they were playing the big bad wolf after the sheep or some game. But then he caught a glimpse of a wolf in the house, and in the next few moments, a small boy stood in its place. 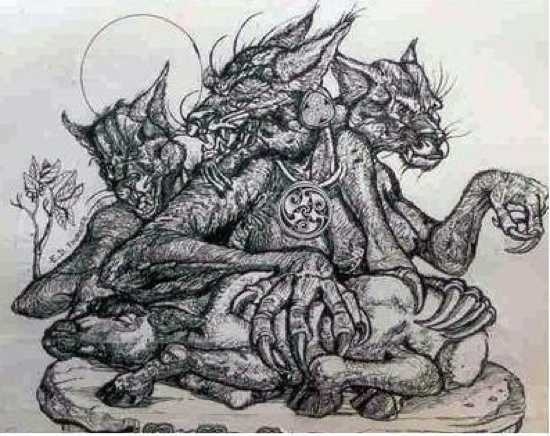 In 1521, Jean Boin, Inquisitor of Besancon, tried Philibert Montot, Pierre Bourgot, and Michel Verdun for having made a pact with the devil and for lycanthropy. These men became known as the werewolves of Poligny.

These men came under suspicion when a traveler passing through the area was attacked by a wolf. While defending himself, he was able to wound the animal, forcing it to retreat. Following the trail of the injured creature, the man came upon a hut where he found a local resident, Michel Verdun, under the care of his wife, who was washing a wound on his body. Believing Verdun’s injury to be a sympathetic wound, the man notified the authorities. Arrested and tortured, Verdun admitted that he was a shape-shifter. He also revealed the names of his two werewolf accomplices, as well as confessing to hideous crimes: diabolism, murder, and eating human flesh. The three men were promptly executed.