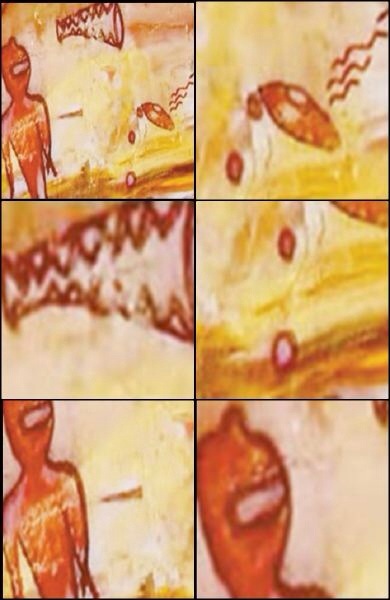 The image was found in the Hoshangabad district of the state of Madhya Pradesh only 43 miles from the local administrative centre of Raisen. The caves are hidden deep within dense jungle.

Also visible is another object that might depict a wormhole, explaining how aliens were able to reach Earth.

Local Archaeologist, Mr Wassim Khan, has personally seen the images. He claims that the objects and creatures seen in them are totally anomalous and out of character when compared to other, already discovered, examples of prehistoric cave art depicting ancient life in the area. As such he believes that they might suggest beings from other planets have been interacting with humans since prehistoric times.

Few years back, three and a half million years old Prehistoric human skull was discovered in Ahthnor village of Madhya Pradesh by geologist Dr. Arun Sonakia. It is possible that the image was drawn by those ancient humans.

Did encounters like this help Indian ancient civilization understand how those alien spaceship worked and later documented in Vimana shastra?