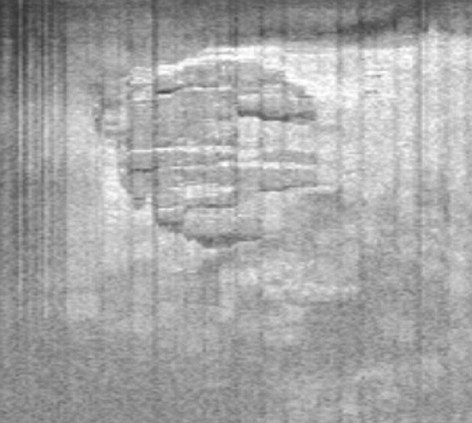 Divers exploring a ‘UFO-shaped’ object in the  Baltic sea say that the strange, curved object might be a Nazi device lost  beneath the waves since the end of the Second World War.

Sonar scans have shown that the device,  raised 10ft above the seabed and measuring 200ft by 25ft, could be the base of  an anti-submarine weapon.

The weapon was built with wire mesh which  could have baffled submarine radar, leading enemy craft to crash – much in the  same way as turning out a lighthouse could be used as a weapon against shipping.

But now former Swedish naval officer and WWII  expert Anders Autellus has revealed that the structure – measuring 200ft by 25ft – could be the base of a device designed to block British and Russian submarine  movements in the area.

The huge steel-and-concrete structure could  be one of the most important historical finds in years.

Autellus claims it would have been built of  double-skinned concrete and reinforced with wire mesh to baffle radar – which  could explain why the dive team’s equipment repeatedly failed near the mystery  object.

‘The area was vital to the German war machine  because most of the ball bearings for its tanks and trucks came from here.  Without them the German army would have ground to a halt,’ explained one  expert.

‘This device dwarfs anything ever found  before and is an important weapons discovery,’ they added.

Explorer Stefan Hogeborn – who is studying  the images for the Ocean X diving team – agreed: ‘It is a good candidate for the  answer to this mystery. The object lies directly underneath a shipping  route.’

‘It would be of enormous weight in steel and  concrete. Other Nazi anti-sub anchoring devices were nowhere near as large,’ he  added.

While the Ocean Explorer team is  understandably excited about their potentially earth-shattering find,  others  are slightly more sceptical and are questioning the accuracy of  the sonar  technology. 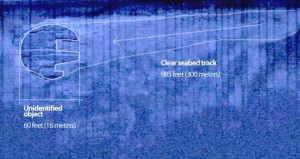 The Swedish team exploring the structure have  been plagued with problems.

The divers  exploring a ‘UFO-shaped’ object  at the bottom of the Baltic Sea said that team their equipment stops working  when they approach within 200m.