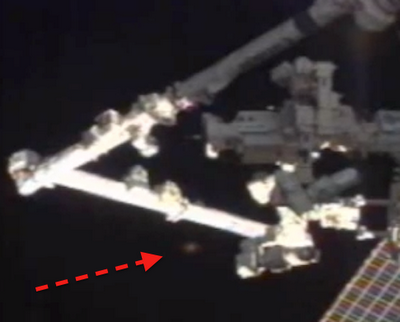 recent video of a brown coloured orb seen near the Earth’s Orbit on the International Space Station on the 16th of November was launched on YouTube by Streetcap1, and published in The Canadian. The International Space Station on a daily basis receives such UFOs that regularly visit the area and can be easily caught on your screen recorder near the ISS if you look for them . There have been several sightings of UFOs near the ISS and though many sightings can be viewed in the form of pictures, there is still no video evidence of these UFOs and hence commenting any more on their appropriate size or speed is impossible.

With the help of screen recorders you can actually catch a UFO in action. In this particular incident we initially had photographs alone that were taken on through live cam. Another photograph which was released earlier on and is said to have been taken from the Earth’s Orbit on ISS by an astronaut earlier this month using the high end cameras that are available on the satellite may help in describing the UFOs to an extent. This particular photo of the UFO was also posted on a NASA site and the details it shows is simply mind blowing.

Scott C. Waring (author of UFO Sightings Daily) interpreted the pictures that were received from near the ISS in an article in the ‘Before it’s News’ and a post on his personal site.

“The Flying Object or UFO resembles somehow to the spacecraft that is shown in the movie Farscape. The photograph also shows a light at the belly of the craft which is a common reporting in UFO crafts that are triangular shaped.”

These triangular shaped crafts have been sighted several times in different places in the past and some common description that is almost always received from witnesses is the colour of the craft which is most of the time black. There tremendous speed is also worth mentioning as they travel at an incredible speed and appear and disappear all of a sudden from and to nowhere. Their presence and absence is seen and judged within a blink of an eye.

The sighting history of these triangle shaped crafts has been dated back to the 1950s, and to many people these crafts were military projects that were kept secret. These beliefs were not only present at that time rather even today many people believe in them. The question here is if these crafts are secret military projects what are they doing in space ( near the ISS specifically), and if these projects are next generation aircrafts how come no development or technology advancement has been made in the past years as these crafts from the 50’s and 60’s have been flying in the same way.

Whatever these objects may be, their purpose is unknown to the public as a whole, but there have been a lot of such sightings coming from the most unusual of places lately. Are the days of realization coming very near?