Did Aliens visit us in ancient times? what better place to look than ancient art works.

Around the world hundreds of UFO’s and starange Alien like beings have been recorded in old artwork and cave paintings. Some of these drawings are so strange they can not be explained.

Petroglyphs dating back thousands of years ago by ancient Indians in the American Southwest. According to Indian folklore, two objects collided high in the sky and one crash-landed in the region of Death Valley. Some men arrived (presumably in another ship) and spent some time repairing the damaged craft and were observed by the local Indians.

These images from the 12th century manuscript “Annales Laurissenses” (Latin for “volumes” or “books” about “historical and religious” events) depicts the Saxon siege of Sigiburg Castle, France, in the year 776. The Crusaders had the medieval French completely surrounded when the “flaming shields” suddenly appeared in the sky; (the manuscript reports this as being over a church). Assuming the French were being protected, the Saxons fled in fear from the UFOs. 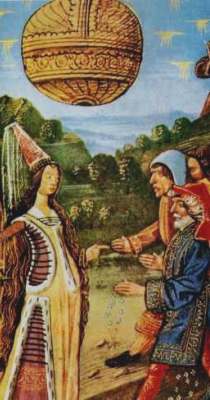 Image from the French book Le Livre Des Bonnes Moeurs (“The Book Of The Moralities”) by Jacques Legrand, 1338 (left). Sphere resembles a Montgolfiere (hot-air baloon) – but there were no balloons 14th centurey France. Notice also: several daylight stars, the monstrous faces in the rocks and the men are offering seeds? 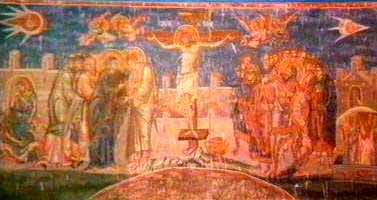 Frescos throughout Europe which reveal the appearance of space ships in the skies including this painting of ‘The Crucifixion’ – painted in 1350. It seems to depict a small human looking man looking over his shoulder – at another UFO as if in pursuit – as he flies across the sky in what is clearly a space ship. The leading craft is decorated with two twinkling stars, one reminiscent of national insignia on modern aircraft. This paintng hangs above the altar at the Visoki Decani Monestary in Kosovo, Yugoslavia 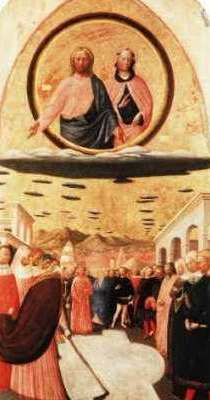 The Miracle of the Snow by Masolino Da Panicale circa 1400 (right) from Florence, Italy ~ in the Church of Santa Maria Maggiore, depicting Jesus and Mary on very non vaporous “lenticular clouds” (flat and circular), or accompanied by an armada of flying saucersstretching beyond the horizon.

A fourteenth century fresco of the Madonna and Child depict on the top right side the image of a UFO hovering in the distance. A blow up of this fresco reveals tremendous details about this UFO including port holes. It seems to indicate a religious involvement between UFO’s and the appearance of the Christ Child. 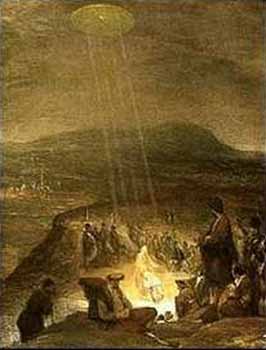 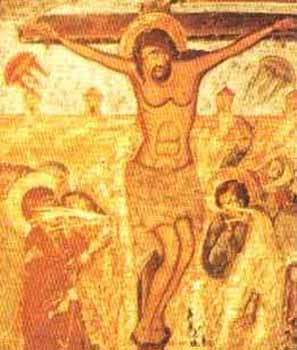 17th century fresco of the crucifiction – Svetishoveli Cathedral in Mtskheta, Georgia. Note the two saucer shaped craft on either side of Christ. In the two blow ups you can see that they contain faces. Certainly ancient UFOs were associated with the highest of divinity but were the requisite lights also thought to be the eyes of angels?