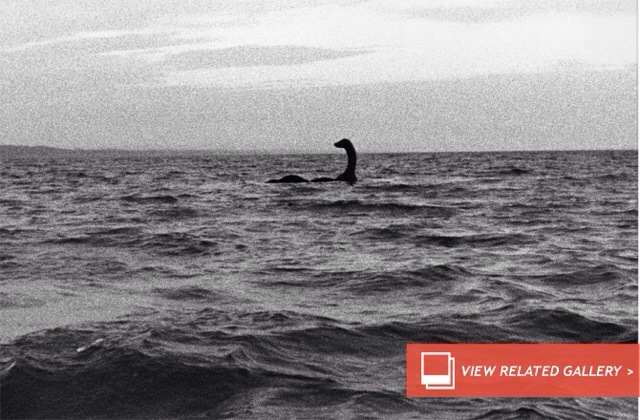 The recent discovery of a monstrous fish off the Southern California coast has people buzzing. Photos of people holding a long piscine monster have spread around the Internet; there are of course many fake “big fish” photos floating around, but this one is not a Photoshop job, nor a hoax.

As a Discovery News story noted, “The staff and kids at a Southern California educational facility got quite a surprise when an 18-foot-long (5.5 meters) serpentlike sea creature washed up near the shore. While swimming in about 20 feet (5 meters) of water, dive instructor Jasmine Santana saw a large, silvery, slender figure on the sandy bottom on Sunday.” It took 25 people to pull the bony monster with reddish fins out of the water and pose it for photographs.

The creature — not a true sea monster but as close to one as most people will ever, or would ever, want to get to one — is a rare animal called an oarfish. Because they typically live deep in the ocean, little is known about them, though scientists believe that they may grow to be twice as long as the most recent specimen.

Seeing the amazing photograph led many to wonder if these marine monsters might be mistaken for lake monsters or sea serpents. Could an oarfish (or, more realistically, a family of them) be responsible for sightings of Scotland’s famous Loch Ness monster over the years? It’s a tantalizing possibility, though scientifically unlikely.

For one thing, oarfish, whether small or huge, are not found in Loch Ness. Oarfish also tend live in temperate to tropical ocean waters and the most famous lake in the Scottish Highlands would likely be too cold for them. Furthermore, oarfish are saltwater fish, while Ness — fed by several large rivers — is freshwater. Though some marine animals, such as several species of dolphins, are known to have adapted to freshwater, oarfish are not among them.

If not an oarfish, then what? Last year a researcher offered a new theory about what real animal might be behind some of the Loch Ness reports. Bruce Wright, a senior scientist at the Aleutian Pribilof Island Association, wrote an article suggesting that Nessie sightings may in fact be sleeper sharks, which can reach 20 feet long and weigh more than 4 tons. Wright theorized that the sharks might enter Ness through rivers connected to the ocean.

Perhaps the best-known monster of the deep is the giant squid. The animals were known to exist because dead ones occasionally wash up on beaches. The largest giant squid specimen, found in New Zealand, was estimated to be 65 feet long. Like the oarfish, because the elusive giant squid lives at great depths, no one had ever seen a living one in its environment until 2004, when two Japanese zoologists filmed a giant squid. The creature, about 26 feet long, was found nearly 3,000 feet below the surface.