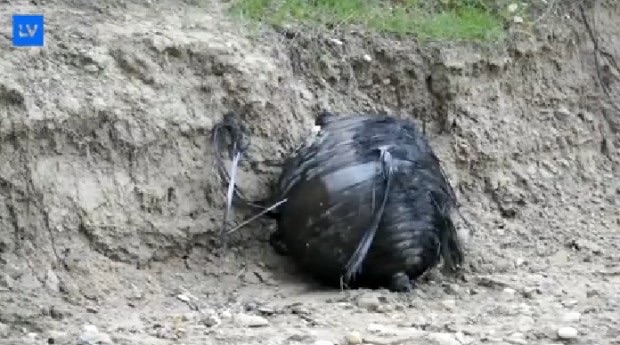 At least three strange black orbs have appeared out of no where in fields near rural villages in Spain,

The strange unidentifiable silver and black balls are still falling from the sky!

Officials and resident of a town Villavieja, Spain are starting to get really worried following the crash of a third large mystery orb in their area.

The first orb was reported found last week in the village of Villavieja – the silver sphere created a large crater in a field outside of the village and was covered in detail by Spanish press.

Now scientists are reported as handling the puzzling orbs with utmost care, even wearing gloves and protective gear while they study the mystery object.

The civil guard also sealing off the area and guarding the orbs – preventing press investigators from getting close. No explanation has yet been given by Spanish authorities.

The third orb to be found in Spain in the past few days was the biggest. The first one, estimated to be about 20 kilogrammes in weight, was located in a remote field in the village of Calasparra in Murcia.

Each of the mysterious objects is estimated to be 80 centimetres in diameter with a hole at one end and appeared to built around wire frames.

The locals who found the first black sphere said they didn’t see any footprints in the muddy field around it, suggesting it had fallen from the sky.

Other sightings followed a few days later in the nearby town of Calasparra.

La Verdad reported someone speculating that the object could be a “pressure vessel for gas (COPV), possibly from a space station or flying saucer. These objects are made of an unknown material – and appear strong enough to survive reentry into the earth and even catastrophic explosions.

A somewhat similar looking object, though not black, was discovered in Nambia a few years ago. At the time, it was identified as likely a fuel tank to supply unmanned Space craft.