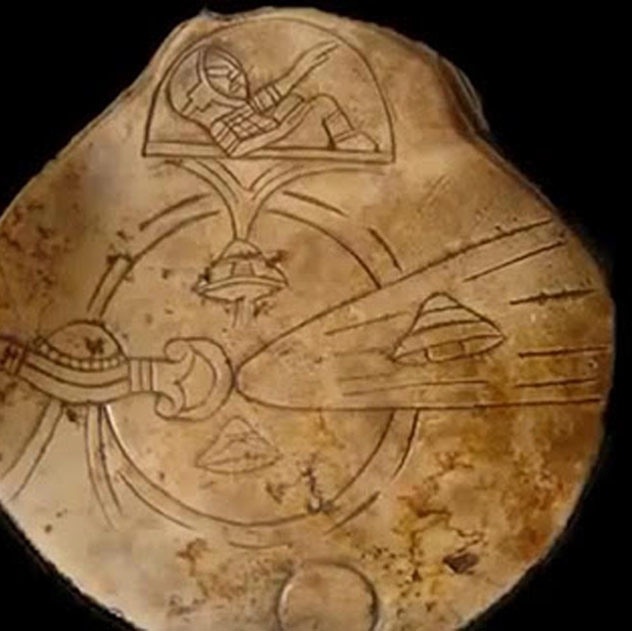 The proof of ancient aliens held by the Mexican Government has yet to be released!

The story goes like this: In 2012, the Mexican government released a number of Maya artifacts they had been protecting for 80 years as state secrets. These objects were retrieved from an unexplored pyramid that was found under another pyramid in Calakmul, the site of one of the most powerful ancient Maya cities. A government-sanctioned documentary by Raul Julia-Levy (the son of famous actor Raul Julia) and financier Elisabeth Thieriot (ex-wife of a former publisher of the San Francisco Chronicle) featured a number of these finds, most of which clearly depict UFOs and alien visitors.

The case may seem fairly enticing, but once you look closer, a strange pattern of fraud begins to emerge. Both of the documentarians seem to be lying about something. Julia-Levy doesn’t appear to be who he claims to be—Raul Julia’s widow has publicly called out a con man named Salvador Alba Fuentes. According to her, Salvador is attempting to ride on her late husband’s fame and is going around telling everyone his name is, yes, Raul Julia-Levy.

Meanwhile, Thieriot has shut down the production of the documentary and sued her partner, accusing “Julia-Levy” of stealing her documentary and misusing filming equipment (a statement “Julia-Levy” vehemently opposes). What’s more, there seems to be very little scientific proof of the authenticity of the artifacts, and the pictures that have emerged online are less than concrete evidence. Perhaps the artifacts were cheap fakes manufactured by a local artisan. Perhaps the officials had second thoughts about the documentary and ordered Thieriot to shut it down by any means necessary. Whatever the truth behind these strange artifacts is, their case is far from convincing.