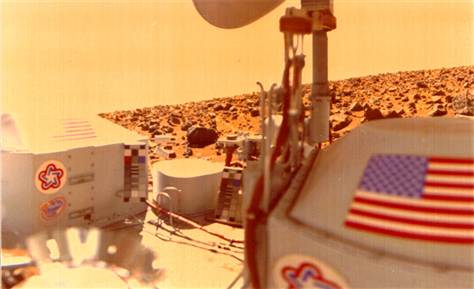 New analysis of 36-year-old data, resuscitated from printouts, shows that NASA found life on Mars, an international team of mathematicians and scientists conclude in a paper published this week.

Further, NASA doesn’t need a human expedition to Mars to nail down the claim, neuropharmacologist and biologist Joseph Miller, with the University of Southern California’s Keck School of Medicine, told Discovery News.

“The ultimate proof is to take a video of a Martian bacteria. They should send a microscope — watch the bacteria move,” Miller said.

Miller’s confidence stems in part from a new study that reanalyzed results from a life-detection experiment conducted by NASA’s Viking Mars robots in 1976.

Researchers crunched raw data collected during runs of the Labeled Release experiment, which looked for signs of microbial metabolism in soil samples scooped up and processed by the two Viking landers. General consensus of scientists has been that the experiment found geological, not biological, activity.

The new study took a different approach. Researchers distilled the Viking Labeled Release data, provided as hard copies by the original researchers, into sets of numbers and analyzed the results for complexity. Since living systems are more complicated than non-biological processes, the idea was to look at the experiment results from a purely numerical perspective.

They found close correlations between the Viking experiment results’ complexity and those of terrestrial biological data sets. They say the high degree of order is more characteristic of biological, rather than purely physical, processes.

Critics counter that the method has not yet been proven effective for differentiating between biological and non-biological processes on Earth, so it’s premature to draw any conclusions.