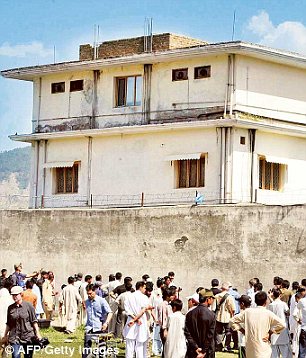 Bin Laden hid here for years! Terrorist: Osama bin Laden was killed on May 1, 2011 in the now-famous raid by Navy SEAL Team Six at his secret Pakistan compound

Bin Laden WAS NOT buried at sea,

but flown to the U.S. for cremation at secret location, claims intelligence boss in leaked email.
Emails purported to be obtained by hacker group Anonymous dispute White House version of terror leader’s final resting place
Believed to be part of 2.7million emails obtained from intelligence analysis group Stratfor and shared with WikiLeaks
Stratfor calls hackers ‘thieves’ and says some emails may have been forged or altered

The fate of Osama bin Laden’s remains have been  called into question after emails leaked from an intelligence analysis firm say  the body of the terror leader was actually sent to the U.S. for  cremation.

According to the emails, the Al Qaeda boss  was shot and killed during the famous Navy SEAL Team Six raid on his compound in  Abbottabad, Pakistan, was transported back to the U.S. and cremated.

The emails were allegedly obtained by the  hacker group Anonymous from Stratfor, an organisation dealing with analysis of  intelligence and geopolitical analysis.

Last week, Anonymous announced that it had  gotten access to 2.7million of the firm’s confidential correspondences, and said  they could provide ‘the smoking gun for a number of crimes’.

The hackers said Stratfor, based in Austin,  Texas, were ‘clueless’ when it came to database security.

After bin Laden was killed in the famous raid in Pakistan on May 2 2011, the Obama administration said his body was buried at sea off the USS Carl Vinson – in accordance with Islamic tradition.

But in a particular set of emails given to  WikiLeaks, the firm’s vice president for intelligence, Fred Burton, says he  doubts the official White House version of what happened to bin Laden’s  body.

Stratfor’s vice-president for intelligence,  Fred Burton, says the body was ‘bound for Dover, [Delaware] on [a] CIA plane’  and ‘onward to the Armed Forces Institute of Pathology in Bethesda  [Maryland]’.

The claims are sure to stoke conspiracy  theorists, especially since the Armed Forces Institute of Pathology that Burton  refers to closed its doors on September 15, 2011, four months after bin Laden’s  death