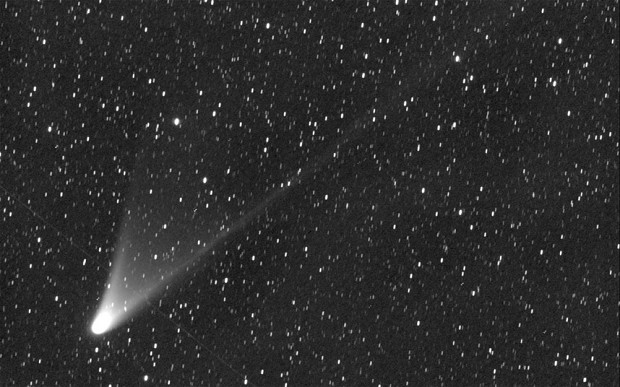 The comet, known as C/2011 L4 Pan-Starrs, can be seen through binoculars from Friday night in the Northern Hemisphere and will become gradually brighter until early next week when it could be visible to the naked eye. It has already passed by the Southern Hemisphere where astronomers reported that it appeared as bright in the night sky as The Plough constellation.
This weekend will be the first opportunity to see the comet from Earth after it was discovered by Hawaii’s Pan-Starrs telescope in June 2011 at a distance of a billion kilometres.

It is thought to be a non-periodic comet, meaning it is not a regular visitor to the Solar System and may not be seen again for 100,000 years.

But cloud could prevent it being seen from anywhere other than the south west of England on Friday, while Saturday the only clear skies may be in the north west and west of Scotland.

Fortunately, the cloudy fronts are expected to disperse in time for the best viewing opportunities early next week, when the comet will appear brightest in the sky.

A Met Office spokesman said: “There will be some cloud running in from the North Sea but there is a great chance of clear skies, particularly on Tuesday”.

The comet’s core is estimated to be about 25km wide, but a cloud of gas and dust surrounding may stretch over more than a million kilometres.

After its arrival in our field of view on Friday the comet will approach the Sun, reaching its closest point of 45 million kilometres on Sunday. As it draws nearer it will appear brighter, with ice in its outer layer turning to gas.