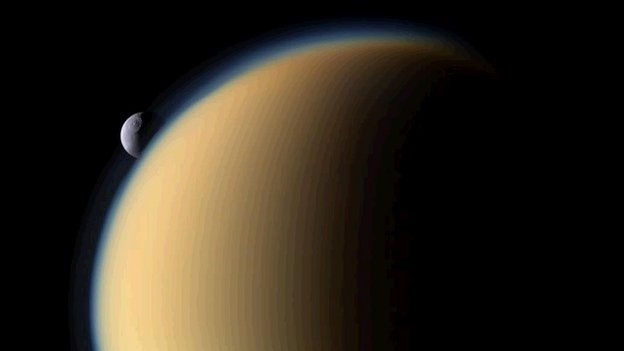 Wind and rain create similar features to those found on Earth, such as dunes, lakes and rivers

But on Titan it rains liquid methane, filling the rivers, lakes and seas with hydrocarbons

Scientists believe they have detected the first liquid waves on the surface of another world.

The signature of isolated ripples was observed in a sea called Punga Mare on the surface of Saturn’s moon Titan.

However, these seas are filled not with water, but with hydrocarbons like methane and ethane.

These exist in their liquid state on Titan, where the surface temperature averages about -180C.

“We think we’ve found the first waves outside the Earth”

Titan is a strange, looking-glass version of Earth with a substantial atmosphere and a seasonal cycle. Wind and rain shape the surface to form river channels, seas, dunes and shorelines.

But much of what’s familiar is also turned sideways: the moon’s mountains and dune fields are made of ice, rather than rock or sand, and liquid hydrocarbons take up many of the roles played by water on Earth.

The vast majority of Titan’s lakes and seas are concentrated around the north polar region. Just one of these bodies of liquid – Ligeia Mare – is estimated to contain about 9,000 cubic km of mostly liquid methane, equating to about 40 times the proven reserves of oil and gas on Earth.

An image of Titan’s north pole taken by the Cassini probe during a flyby in July 2012 shows sunlight being reflected from surface liquid in much the same way as a mirror re-directs light. This phenomenon is known as a specular reflection. 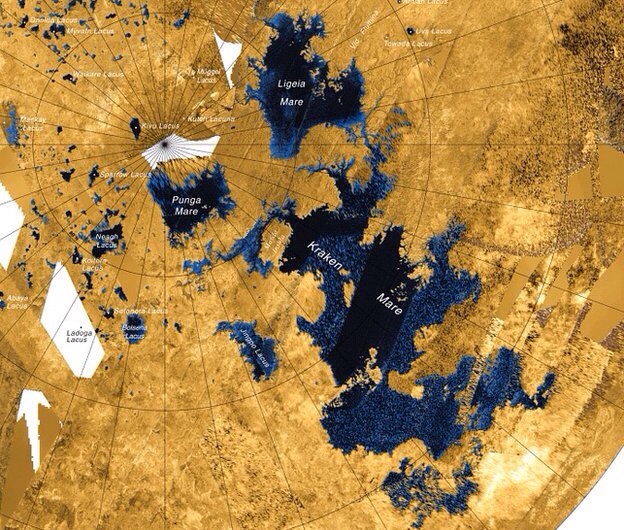