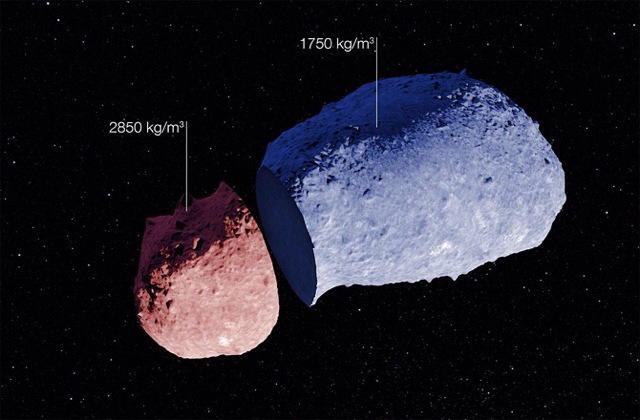 25143 Itokawa is a relatively small near-Earth asteroid that was visited by the Japanese Habayusa spacecraft in 2005. It has also been monitored by Stephen Lowry of the University of Kent and his colleagues over a twelve year span with the 3.58 meter New Technology Telescope in La Silla, Chile. In that time span, Itokawa has made five near approaches to Earth.

By carefully studying the brightness change of the asteroid over time, Lowry and his colleagues were able to very accurately measure the change in the spin of the asteroid at different points in its orbit. These changes are incredibly minute — a 0.045 second change per year — and are caused by the Yarkovsky-O’Keefe-Radzievskii-Paddack (YORP) effect.

This multi-nomenclatured YORP effect describes how an asteroid absorbs and re-emits heat from the sun. Exactly how that absorption and re-emission happens depends on the asteroid’s size, shape, and composition. With the up-close observations from the Habayusa spacecraft, the astronomers could model the shape and thermal properties of the asteroid. What they found is that it’s not one simple object.

The asteroid appears to be composed of two different types of material that have been “mashed” together to form one peanut-shaped body. Though it has been suspected that many asteroids are collections of smaller bodies coming together from their mutual gravity (in a “rubble pile”), this is the first time we’ve actually seen it borne out of data.

Using the data and models, Lowry and his colleagues found that the center of mass of the asteroid was 21 meters away from where it was expected to be. This can occur if the two sides of the asteroid each have different densities, as demonstrated in the graphic at the top. One piece has almost twice the density of the other! This gives astronomers a clue into binary asteroid scenarios and the real composition and make-up of near Earth asteroids.