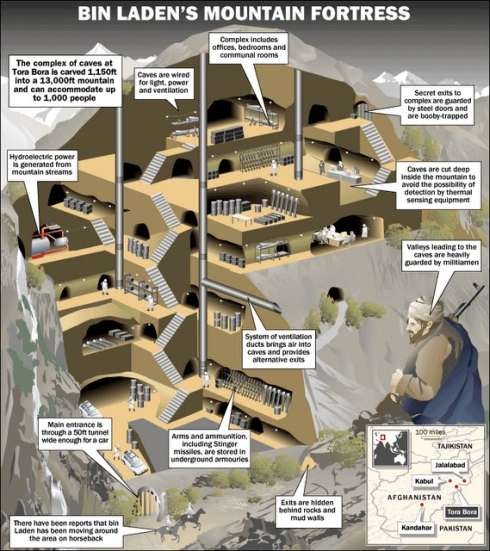 Let’s not forget that Bin Laden’s own design experiments were regularly thwarted. First there were the famous Tora Bora caves in eastern Afghanistan. According to the press, these really were the stuff of Bond movies. A month after 9/11, the Independent published a sensational description of Tora Bora as an impregnable base built deep inside a mountain. The Times then printed an even more preposterous cross-section of “Bin Laden’s underground fortress”, equipped with its own hospitals, offices, bedrooms, hydroelectric power supply, and roads big enough to drive a tank into, apparently. The US did little to deny it. Presented with this fantasy design, Donald Rumsfeld stated, “there’s not one of those, there are many of those”. According to some reports, Bin Laden really did fit the caves with ventilation and hydroelectric power systems for Tora Bora, drawing on his civil engineering knowhow. He can’t take full credit; the caves were primarily built during the 1980s by the mujahideen, using CIA money, but who knows what might have been had the US not bombed him out of there?

Most of Bin Laden’s other homes were similarly destroyed by US air raids at some stage. He appears to have been flirting with dictator chic in his half-built house in Kandahar, which was said to include a mosque, 15 bedrooms, western bathtubs, carved wooden window frames and pastel-coloured conference rooms. Oddly enough, Turner prize-nominated British artists Langlands and Bell found another of his bombed-out Afghan residences in Jalalabad, Afghanistan, in 2002, which they turned into a digital art piece.

In his final Pakistan abode, though, Bin Laden was cornered into the architecture of anonymity. Despite spending a million dollars on his bespoke compound, it had to be as inconspicuous as possible. Perhaps the frustrated fugitive still harboured some ambitions of grandeur, hence the ostentatious security wall, 18 feet high in places. And the fact that the house was roughly eight times larger than its neighbours – a mansion of mediocrity, and a bit of an own goal in the anonymity department. As a White House spokesman stated, “Intelligence analysts concluded that this compound was custom-built to hide someone of significance.” When it came down to it, Bin Laden just couldn’t rein his architectural ambition in, and it proved to be his downfall.