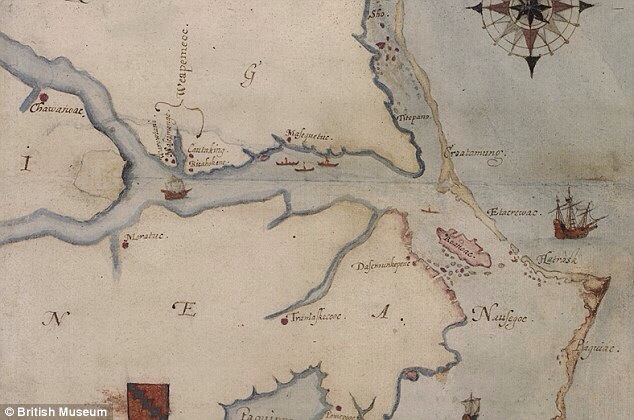 The mystery of what became of the 120 settlers who tried to establish England’s first colony on the north-east coast of America has remained unresolved for 400 years.

Queen Elizabeth I and famed explorer Sir Walter Raleigh had hoped the expedition in the 1580s would create a capital in the New World, but something went terribly wrong.

The men, women and children simply vanished – possibly massacred by native American Indians – and any evidence of a settlement disappeared and the infamous ‘lost colony’ became rooted in American folklore. 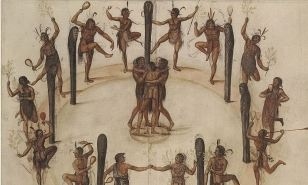 Last year, a centuries-old map of the area drawn by a man on that voyage rekindled interest in the fate of the lost colonists.

Tests found a hint at the possible location of what may have been intended as the colony’s capital near Roanoke Island, apparently drawn in invisible ink. 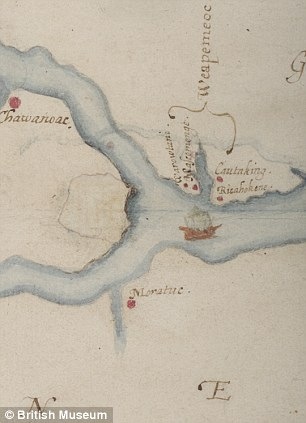 The ‘x-marks-the-spot’ was shown in the form of a lozenge, the symbol for a fort, on the map drawn by John White, who accompanied Raleigh’s first attempt to establish the colony and who led the settlers on their quest to set up the ‘Cittie of Raleigh’.

The ink, which is also disguised by a piece of paper glued to it, was likely put together using milk, citrus juice or urine, as was common at the time. 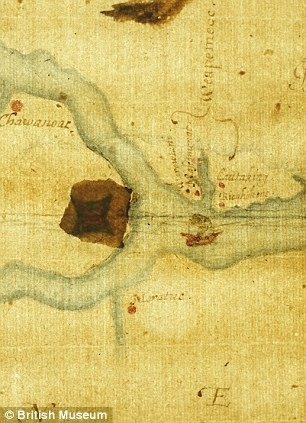 TIMELINE: WHAT WE KNOW SO FAR

1586 — Colonists and Native Americans at ‘war,’ and colony abandoned.

1590 — Captain White returns to Roanoke to find the colony gone.

1602 — Raleigh makes another attempt to locate the colony.

2012 – experts identified a tantalising clue hidden in a map drawn by a man on that fateful voyage.

2013 – Researchers study the site with the help of magnetometers and GPR.