Home Space What is a galaxy?
UNEXPLAINED MYSTERIES 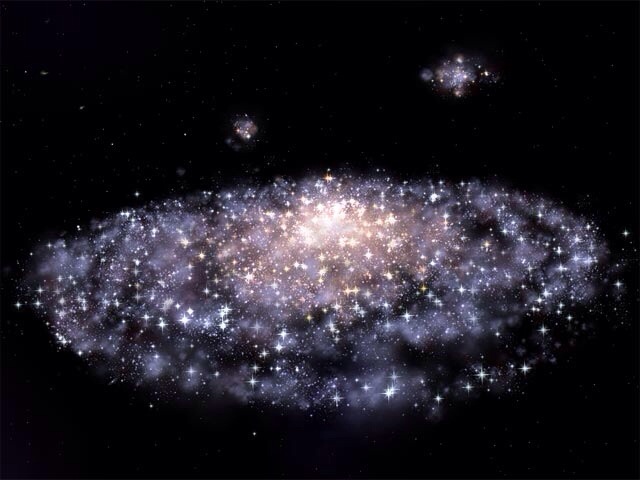 What is a galaxy?

Galaxies are large systems of stars, dust and gas bound together by gravitational force. They are elliptical, spiral or irregular in shape. Our Sun is part of a spiral galaxy called the Milky Way, and lies about two-thirds of the way out from the centre to the edge.

How many stars in a galaxy?

The best estimates suggest that the Milky Way contains about 500 thousand million stars and a total mass equivalent to 1.9 million million Suns.

Galaxies vary in size considerably. For example, giant elliptical galaxies may have up to 100 times the mass of the Milky Way (or the equivalent of 1900 million million Suns) whereas the recently discovered Ultra-Compact Dwarf galaxies may have just a few tens of millions of stars.

How many stars and galaxies in the universe?

On a dark night we can often see a band of light stretching across the sky. If we look at this band with binoculars or a small telescope we see that it is partially resolved into stars. This band we call the Milky Way and indeed it is composed of a band of stars most of which are too faint to be resolved so that we see their combined light as a faint glow.

This band is the plane of the disk of our galaxy. The Sun is one, rather faint, example of approximately 200,000,000,000 stars that make up our galaxy. These stars are mostly grouped into a flattened disk which has a bulge at its centre. The Sun is in this disk about two thirds of the way from its centre to its edge. When we look at the night sky we see the Milky Way when we look along the plane of this disk whereas when we look in other directions, out of the plane, we see far fewer stars.

There is a spherical component to our galaxy which contains very old stars and spherical clusters of old stars. These are often referred to as Population 2 objects. Population 1 being the objects found in the disk.

The size of our galaxy is huge; light would take about 100,000 years to cross the Galaxy.

There are many clusters of galaxies. Members of some of the closest can be seen with a small telescope in the constellations Virgo and Coma Berenices. We can trace clusters of galaxies out to the furthest distances that we can reach. Some of these clusters contain thousands of galaxies. Near their centres giant ellipticals are often found and it is thought that these arise from the collision of several galaxies which have combined.

X-ray studies have shown that there is very hot gas between the galaxies in a cluster but this gas does not solve one of the great puzzles in astronomy which is that these clusters require a certain total mass to explain how they are held together but we only can account for one tenth of this mass. This is known as the `missing mass problem’.

Unfortunately those of us who live in the northern hemisphere cannot see the two closest galaxies, called the Magellanic Clouds, which are rather like two satellite galaxies to the Milky Way.

They can easily be seen by the naked-eye and their brightest stars can be seen with binoculars. These two galaxies are much smaller than the Milky Way and are about 200,000 light years away.

In the northern sky we can see two galaxies with the naked-eye. The Andromeda galaxy, M31, is a faint fuzzy patch that appears, with binoculars, as a lens shaped object. It is a galaxy rather like ours at a distance of about 2 million light years. It has two dwarf elliptical satellites which can be seen with a small telescope.

The other galaxy (M33 in Triangulum) is much harder to see although it is at a similar distance to the Andromeda galaxy. This is because it is smaller and less bright intrinsically. It too is a spiral galaxy.