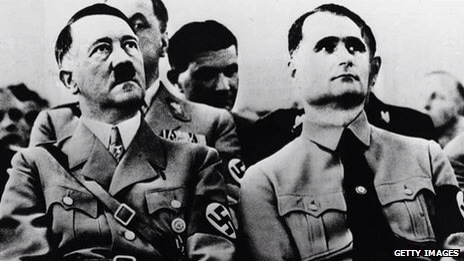 Details: Rudolf Hess was a Third Deputy of the Third Reich, marking him as third in secession behind Hermann Goering in Adolf Hitler’s Nazi Regime of war-torn 1940s Germany. In 1941, at the height of the war, Hess flew a solo flight to England to reportedly meet with British Prime Minister Winston Churchill to negotiate a truce. Initially identifying himself as Alfred Horn, he requested to meet the Duke of Hamilton, but he had no papers to his identity. Skeptics are dubious to the fact that this could have been Hess since his crashed plane had different markings than the plane he had departed Germany in and that the plane that had crashed had actually come from Berlin. Furthermore, he did not fly as if he was an experienced pilot and instead flew as an amateur.

Doctors also found none of the scars Hess had from the first World War. “Hess” was instead rejected by Prime Minister Winston Churchill and arrested as a prisoner-of-war, tried after the war in the war crime trials at Nuremberg and sentenced to life imprisonment at Spandau Prison as its last remaining prisoner. In his later years, “Hess” seemed to feign amnesia and refused to answer questions. He reacted nervous when his secretaries visited him in prison, and after refusing to see his wife and son for several years, he reacted distant when they finally came to see him in December 1969.

On August 17, 1987 during his morning exercise, “Hess” was found dead of an alleged suicide in a greenhouse on the grounds despite the fact his rheumatic arthritis would have made it impossible to hang himself. His guard was mysteriously distracted at the time and both the cable used to choke him and the greenhouse were ordered destroyed. At an autopsy, a coroner found evidence of a possible struggle. Many people including Hess’ surviving son believe the man who claimed to be Hess was not actually Hitler’s deputy but an imposter.