Home Modern Mysteries Who is the Grateful Doe?
UNEXPLAINED MYSTERIES 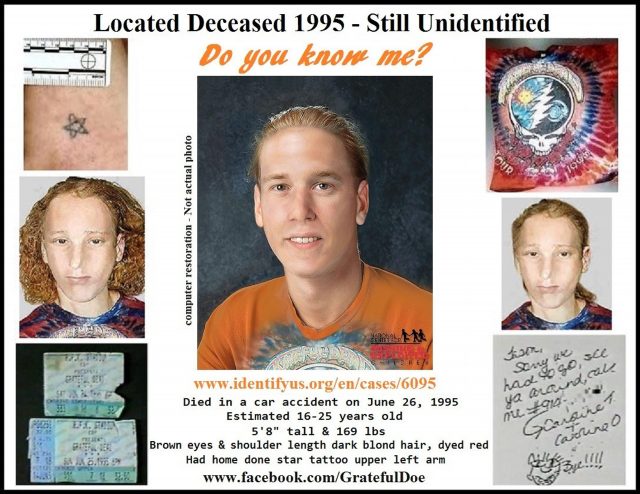 The mystery: A car crash in the state of Virginia on June 26, 1995 resulted in the deaths of two fans of American jam band the Grateful Dead. The driver of the car, Michael Hager, was identified, but not his passenger, thought to be a hitchhiker. He was estimated to be aged between 15 and 21 and on him he had two recently used tickets for Grateful Dead concerts, a lighter and some spare change. A note was also found, which read: “To Jason, Sorry we had to go, see you around, call me #914-[XXXX]. Caroline T. and Caroline O. Bye!!!!” Without an area code, the number proved to be worthless and the two Carolines were never identified. Both men tested negative to having any intoxicants in their blood. Jason’s fingerprints failed to match those of anyone on registers for missing people and his facial injuries were such that mortuary photographs were not released to the public. He was declared a John Doe and nicknamed Grateful Doe.

The sleuthing: Many years later, the case was adopted by users of Reddit, Facebook and Websleuths, a site dedicated to unsolved mysteries. A facial reconstruction image created in 2012 was widely shared, leading to a breakthrough in 2015 – a man came forward suggesting the Grateful Doe was a former roommate of his, although he didn’t remember his surname, and he provided photos. Soon after, a woman in South Carolina purporting to be Jason’s mother contacted a Facebook page dedicated to the case and filed a police report. She said she hadn’t done so previously because Jason – proved by DNA analysis to indeed be her son, Jason Callahan – often ran away and she didn’t know in which state to report him missing. He was 19 and heading south when he died, not to the next Grateful Dead concert in Michigan.