Over the Easter weekend in 2015 daring thieves made away with an estimated £200m haul of diamonds and other jewellery after robbing safe deposit boxes at Hatton Garden Safe Deposit Ltd in London’s famous diamond quarter district of Hatton Garden.

The complex planning behind the robbery, led police investigating the crime to suspect the notorious British mastermind “The king of Diamonds”.

The king of Diamonds

The king of Diamonds last confirmed heist was as a Panama hat-wearing “Mr Big” who turned up to a jewel raid in 2007 driving a Bentley. Dubbed the King of Diamonds, the mystery man was one of two smartly dressed raiders who posed as rich customers to rob the Graff diamond store in London.

During that heist, the pair escaped with millions of pounds worth of jewels including a necklace decorated with 270 diamonds – worth more than £1million on its own.

The loot vanished with barely a trace until one gem allegedly turned up in a Hong Kong pawn shop.

The King of Diamonds thief also had alleged links to Britain’s biggest ever jewellery robbery in 2009, which saw £40million of gems taken from another London Graff store.

Known to be in Spain, the King of Diamonds is reported to have arrived back just before Easter. 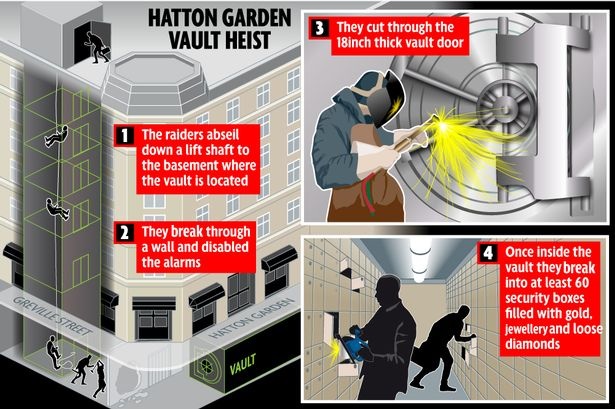 The mastermind planning of the 2015 Hatton Garden Heist

Police claimed the robbers behind the Hatton Garden heist could have started the major underground fire that burned near the crime scene the day before the Easter break. The mysterious fire knocked out power to the area, including the Hatton Garden Safety Deposit Ltd building.

Conviently, that fire disabled the power and the complicated, but old, alarm system within the building the raiders robbed. The fire also diverted emergency services, and the general publics attention.

With the diversion fire in place, on the Thursday afternoon, the raiders broke into an office that adjoins the Hatton Garden Safety Deposit Ltd building and headed for its roof.

From the roof they then broke through a wall.

This allowed them to gain access to a lift shaft within the target building.

The raiders them abseiled down the lift shaft in Hatton Garden Safety Deposit Ltd.

The vault in question is also reinforced with concrete protection doors that are 2m thick.

The raiders then managed to break into about 70 of the 600 safety deposit boxes, which are used by the local diamond and jewellery traders.

It is a well known fact that the London diamond and jewellery traders move stock to the safety deposit boxes over the holiday weekends (for added security). Therefore the timing of the heist ensured a bigger than average haul.

Hatton Garden has been at the centre of London’s diamond trade since medieval times and is made up of over 300 jewellery businesses and 55 shops – the most concentrated cluster of jewellers in the UK.

Many of the boxes contents still remain unconfirmed, as traders are reluctant to reveal what they contained. It is known that most of the boxes were used to store both jewellery and loose diamonds.

On the Friday, the second day of the heist, an alarm was activated in the building – this likely resulted in the raiders fleeing earlier than planned – leaving over 500 boxes, and possibly over £1.5 Billion worth of diamonds intact.

An estimate of the value of diamonds from the 70 boxes raided is believed to be £200m including a number of large stones worth over £500,000 each. 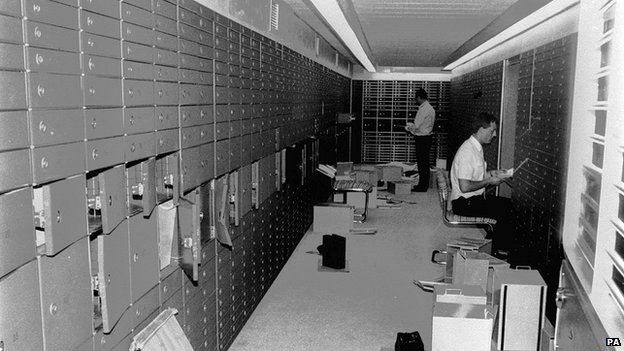 Many jewellers of Hatton Garden teamed up to employ a security firm in 2001 out of fear that the police were not doing enough to deter raiders. The security workers claimed to be ex-SAS and former members of Soviet special forces. Once the alarm was activated members of the security team turned up, but failed to notice a heist was taking place.

The raiders would have had four days to break into all the boxes, before the building reopened on the Tuesday following the Easter holidays.

It is also believed the haul of diamonds left the UK before the robbery was even discovered. Diamonds, once recut and repolished are untraceable.