Home The Future X-37B: Secrets of the US military spaceplane
UNEXPLAINED MYSTERIES 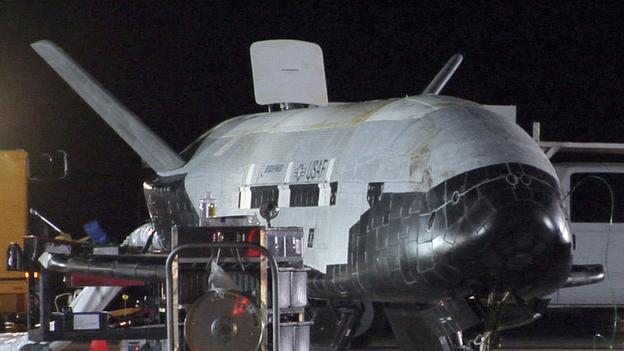 In the early morning of 16 June, 2012, a top secret spaceplane made a picture perfect landing at the Vandenberg Air Force Base in California. To those unfamiliar with the vehicle, it might have looked roughly similar to the US space shuttle, the manned spacecraft that shuttled astronauts into space for three decades.

But this spaceplane, called the X-37B Orbital Test Vehicle, is very different. While it looks like a plane, is launched on a rocket, has a cargo bay and uses some of the same technology as the shuttle, such as thermal shielding to protect it during reentry, it is smaller and unmanned. It is designed to stay in orbit for months on end and can automatically land back on Earth. Perhaps more crucially, the Boeing-designed plane is operated by the US Air Force and its mission is a closely held secret, prompting a slew of speculation about its true purpose.

Since the first X-37B was launched in 2010, amateur satellite spotters have carefully followed the robotic spacecraft’s orbit, while those unconnected with the program have speculated that the plane could be anything from an anti-satellite weapon to so-called “on demand reconnaissance,” shorthand for a spy satellite that can be placed over any country in the world. Compounding the mystery was the launch of a second vehicle in 2011, which stayed in orbit for 469 days, long exceeding the Air Force’s stated maximum requirement of 270 days for the spaceplane.

Now, a third launch is slated for 11 December, according to an Air Force spokesperson, once again ramping up the rumour mill. So, what do we actually know about the plane?

Early reports focused on the X-37B’s seeming resemblance, at least in size and weight, to the X-20 Dynasoar (short for Dynamic Soarer), a 1950s-era hypersonic vehicle that was envisioned for a variety of military missions, including bombing and sabotaging enemy satellites. However, experts familiar with the X-37B programme emphasized that its technology is actually closer to the recently retired space shuttle (a fact reinforced by Boeings’ proposal for a crewed version of the vehicle known as the X-37C). The Air Force blandly described the role of the X-37B in a factsheet given to media as a “reliable, reusable, unmanned space test platform”.

The Air Force also says the mini-shuttle has two objectives: testing “reusable spacecraft technologies” and conducting “experiments which can be returned to, and examined, on Earth”. Again, this is similar to the stated aims of the space shuttle. But many forget that earlier craft also had a secret military role. Although ostensibly a civilian program, it conducted a series of missions from 1982-1992 on behalf of the National Reconnaissance Office, carrying a series of classified spy satellites.

Similarly, most outside experts now agree that it’s likely the robotic space plane is being used for some sort of secret reconnaissance. “I think the guess that makes most sense is quick-response tactical imaging, meaning hours to a couple of days from request to delivery,” says Allen Thomson, a former CIA analyst.